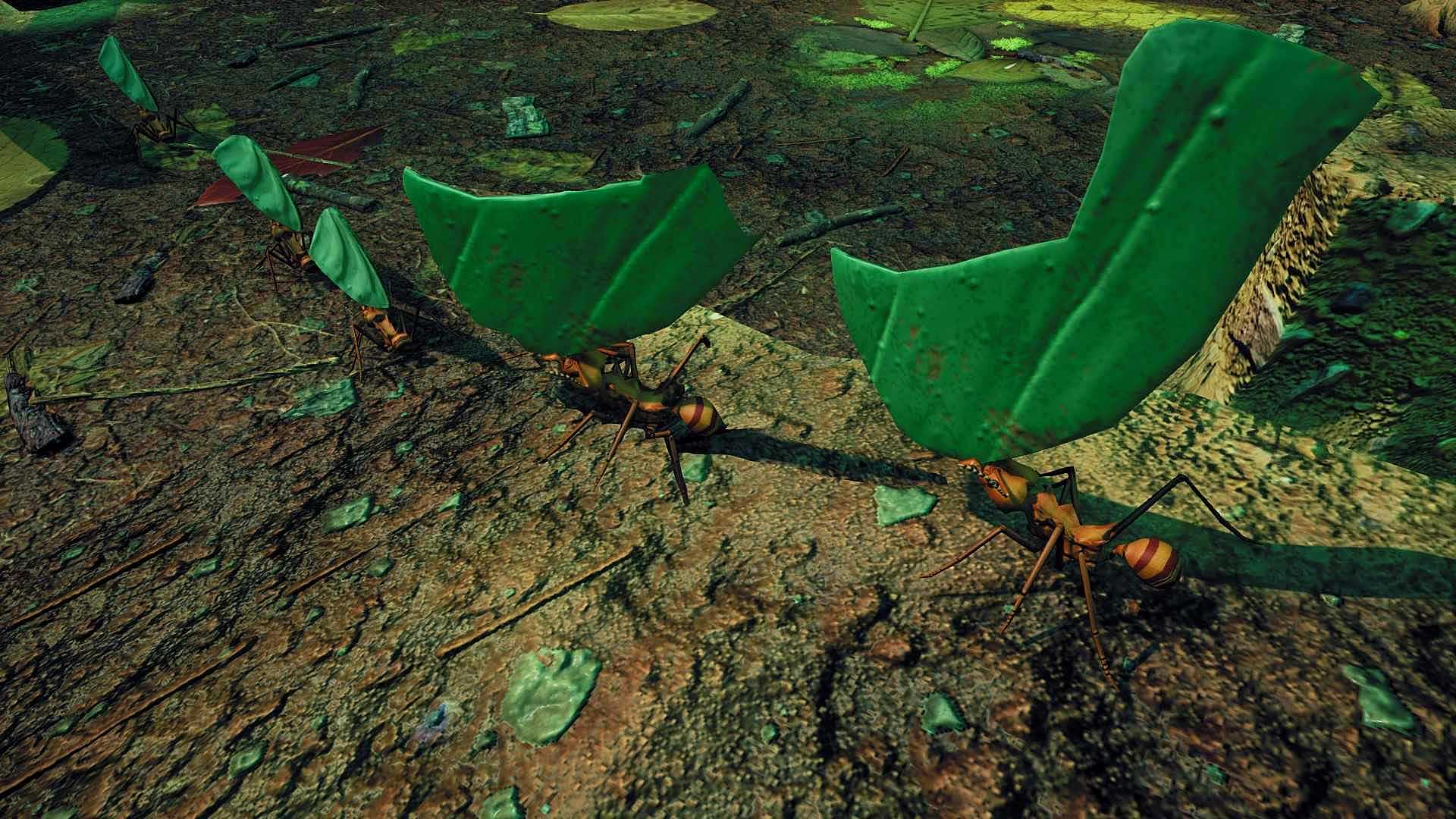 It’s been just over a month since we unleashed our first major update for Empires of the Undergrowth – the Leafcutter Update – upon the world. We’ve worked through most of the glitches and balance issues now, and it’s been a joy to see you guys have fun with the new additions to the game. Feedback has been almost entirely positive and we’re so happy that you guys seem to be enjoying it!

This newsletter will cover some of the issues that have come back in the immediate fallout, go through what we’ve added since the update in a bit more detail, and discuss what’s going to happen in the immediate future.

As I’m sure the vast majority of you are aware, we released the Leafcutter Update on 25th April. We’re pleased with how it went, and we appreciate the feedback you guys have given us that helped us correct some major issues that we didn’t catch during our testing period. Chief of these was a crash that occurred when selling certain tiles – that’s now been resolved. There have also been some balance changes to certain creatures and spawning amounts. There may still be some ways to go on this and of course we’ll continue to monitor feedback.

Colony-vs-colony combat has been something a lot of you have been asking for for quite a while, and it’s something we’ve been itching to do for quite some time. The leafcutter levels finally allow this in a near-true fashion. The enemy colonies in 3.1 The Harvest and the 3rd formicarium challenge are much nearer to a true AI-controlled ant colony than have existed in the previous levels – they have their own underground, pheromone groups, and behaviour trees.

These are stepping stones to truly autonomous colonies which will be useful in a future freeplay update, which will properly dig out their own nests from scratch and all the bells and whistles. Liam is enjoying working on this AI (he’s calling it HiveBot), but it won’t be ready for quite some time – having an AI be able to come close to a human-controlled player without cheating is really tough!

Direction of the Game

There has been concern from a small number of players about the direction the game is headed with colony-vs-colony combat and resource wars. The new levels are very different to the ones that have come before, but it is worth reassuring these players at this stage that not all future levels will involve these mechanics. There’s still plenty of things to explore in the world of the Undergrowth that don’t just involve dominating another colony, but it was something a lot of players (and us) wanted to see.

The largest new addition we’ve made since the release of the leafcutter update is a new demo level called The Crucible. It features leafcutters (minus the majors) and is the only demo level in which you can access the surface. Owners of the game can access it from the alpha demo levels section of “Other Modes” from the main menu.

I imagine just about everyone reading this owns the game, but those who don’t will notice that you have the option of downloading the updated demo from the Steam page. We’ve also put it up on IndieDB. Note that the level is limited and features only rove beetles and spiny devils as enemies.

We’ve added some new UI additions to augment the current selection of keyboard shortcuts – you’ll notice these in the bottom right tab. These are easily-accessible toggle buttons for resource, tile and creature info.

We’ve also started in earnest our effort for language localisation with the support of two new languages – German and Simplified Chinese, which were the most logical ones for us personally to start with. Steam users from these regions should have these enabled by default but a language selection dropdown box can be found in the game options.

Since we now have a very robust system for localisation, we will be adding new languages over time. We’ve already started the process of getting some other translations done for the game – we’ll let everyone know as they’re added.

Since the pressures of completing the main content for the Leafcutter Update are now behind us we’ve been able to make some optimisation changes for some performance enhancements. A long-standing issue has been the upgrade overlay causing a significant drop in framerate, even on relatively high-end systems. Thanks to Matt’s profiling pass there’s been an up to 75% improvement on this now. Various other small things have been done as well (such as removal of near-invisible crystals from soldier tiles that had quite a heavy materials load).

The next large update that will come to the game is a significant re-working and update of features to freeplay mode. Freeplay is in need of some good TLC – we are aware that in its current for it is rather unbalanced and is particularly unforgiving to startup colonies. John has begun work on his reworked freeplay mode – see the video below for his first livestream post-leafcutter update.

There are many new features he intends to add – first and foremost, he will be adding leafcutters themselves as a species option to the mode. This didn’t make it into the main leafcutter update for several reasons – they operate so differently in their food gathering and caste system to the other ants that adding them is far from a trivial task.

It was relatively easy for John to add the new creatures to freeplay in time for release but the leafcutter colony itself needs a lot of work. The climbing system that the leafcutters use needs a way to be saved mid-climb (a first for freeplay – creature actions are not currently saved), and of course there needs to be special landmark and balance considerations for them since they harvest leaves as their only source of food, and want to avoid conflict with other creatures as much as they can since they get no resources from them.

There will also be a re-work of the creature spawning system. Currently, increased difficulty level leads to the spawning of more creatures. Towards the end of a freeplay game this can mean the entire map is simply swamped with enemies, which affects performance as well as experience. John’s plan is to add tiered enemies instead, which means tougher individual enemies rather than more of them.

Also, something we’ve wanted to add to freeplay for some time is optional victory conditions. When we did our last recording session with our narrator we recorded some victory narration for freeplay, and this is the opportunity to implement that properly. Optional conditions might be collect X number of food, kill X uber creatures, or survive for a set period of time. There’s lots of room for experimentation with this!

Finally, John is planning on a brand new freeplay level set in the new rainforest environment. He’s likely to livestream quite a lot of this, talking to the chat and taking suggestions. We’ll post on our social media when we do this and on occasion will post an announcement on the Steam page for particularly important streams.

Obviously, you all want to know what we’re doing with the formicarium campaign next, and we’re 90% sure we know the next species that will be focused on and the theme of levels 4.1 and 4.2. Until we’ve had our big design meeting in early June, though, we’re not quite prepared to tell everyone what that is. As soon as we commit to it, we’ll let you all know in the forums and we’ll also have a section in the next newsletter.

Frazzz has covered Empires of the Undergrowth for a long time. With the leafcutter update he’s taken up his coverage again with renewed vigour – and it’s been a joy watching him discover the new mechanics. It was a little exasperating watching him wondering why his ants were getting sick and dying because he didn’t read the tip about refuse chambers causing this – but he got there in the end!

We’ve obviously been having a blast looking at the screenshots from the new content, and we’ve been spoiled for choice. Here’s three of our favourites from the past month. If you’d like to submit some screenshots the easiest way is to use Steam (F12 by default to take a snap, and F9 by default to enter photo mode). A popup will allow you to upload once you exit the game. You can also email them directly to mike@slugdisco.com. Also, here’s a little tip- we’ve recently added an unlocked photo mode which has no camera restrictions. You might see some funky stuff but it’s a way to get some really interesting angles – to enter it hold down shift while you press the photo mode.