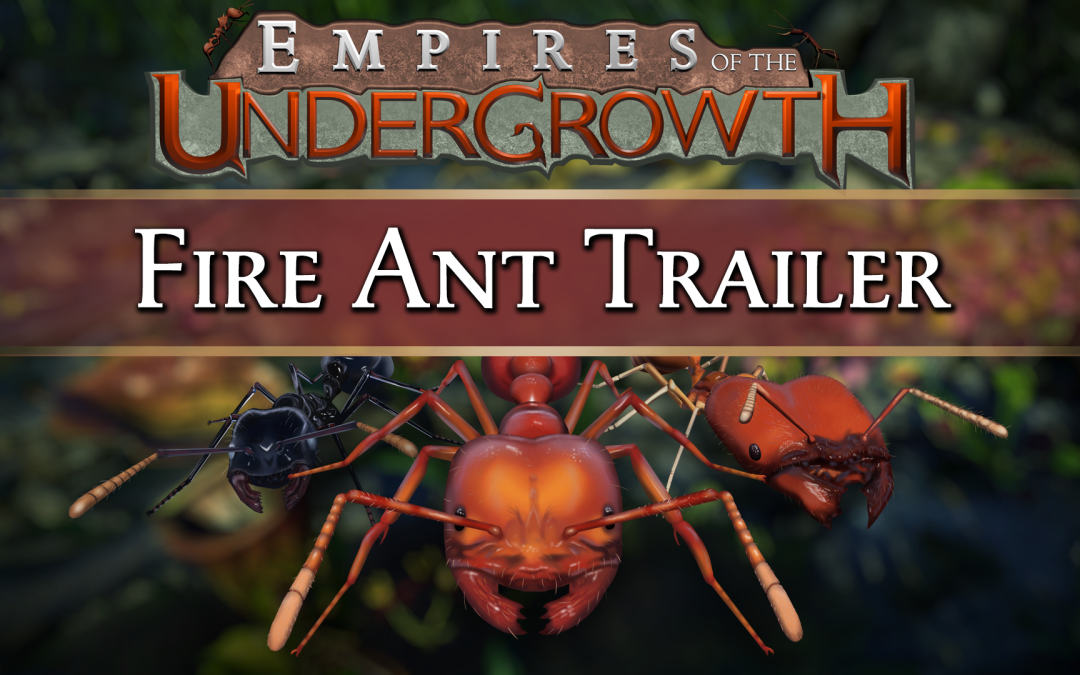 We are delighted to announce that the fire ant update for Empires of the Undergrowth is coming on July 27th 2022! Grab an eyeful of the updated trailer that shows off the new environment and (some of) the new enemies that come along with it.

A whole new formicarium tier awaits – guide a young fire ant (Solenopsis invicta) queen and her first brood as she invades an unfamiliar swamp environment in two full new story missions. The swamp is swimming with amphibians that are not adverse to a spicy snack!

As well as having by far the most critters we’ve added in a single update, the 4th tier includes a long-awaited class of enemy: titans. Titans are huge creatures – big enough, in fact, to be climbed. They do not represent an existential threat since they’re too big to invade the nest, but they must be dealt with in other ways and are a challenging obstacle to be overcome.

Fire ants themselves have a unique ability, outside of their incessant stinging – by linking their bodies together, they can form floating pontoons that can cross water, reaching resources previously unplundered. This is a skill that will come in exceptionally handy in the regularly-flooded green swamp.

They come in two very different soldier varieties – pervasive and vigorous. If you choose pervasive, they will spawn for free after the egg has been on the tile for a time. This can be a crucial advantage when food is scarce. Alternatively, vigorous fire ants will have a significant buff to stats for a time after birth. This opens up the potential for aggressive expansion, but beware of pushing too far too fast. At level 3, both variants will be able to spawn 2 ants from each tile.

Once you’ve conquered the swamp, return to the formicarium where the scientist is far from done with you yet – what dastardly design has he decided is due to your Formica ereptor colony?

We’ll see you on July 27th for the invasion of the fire ants!