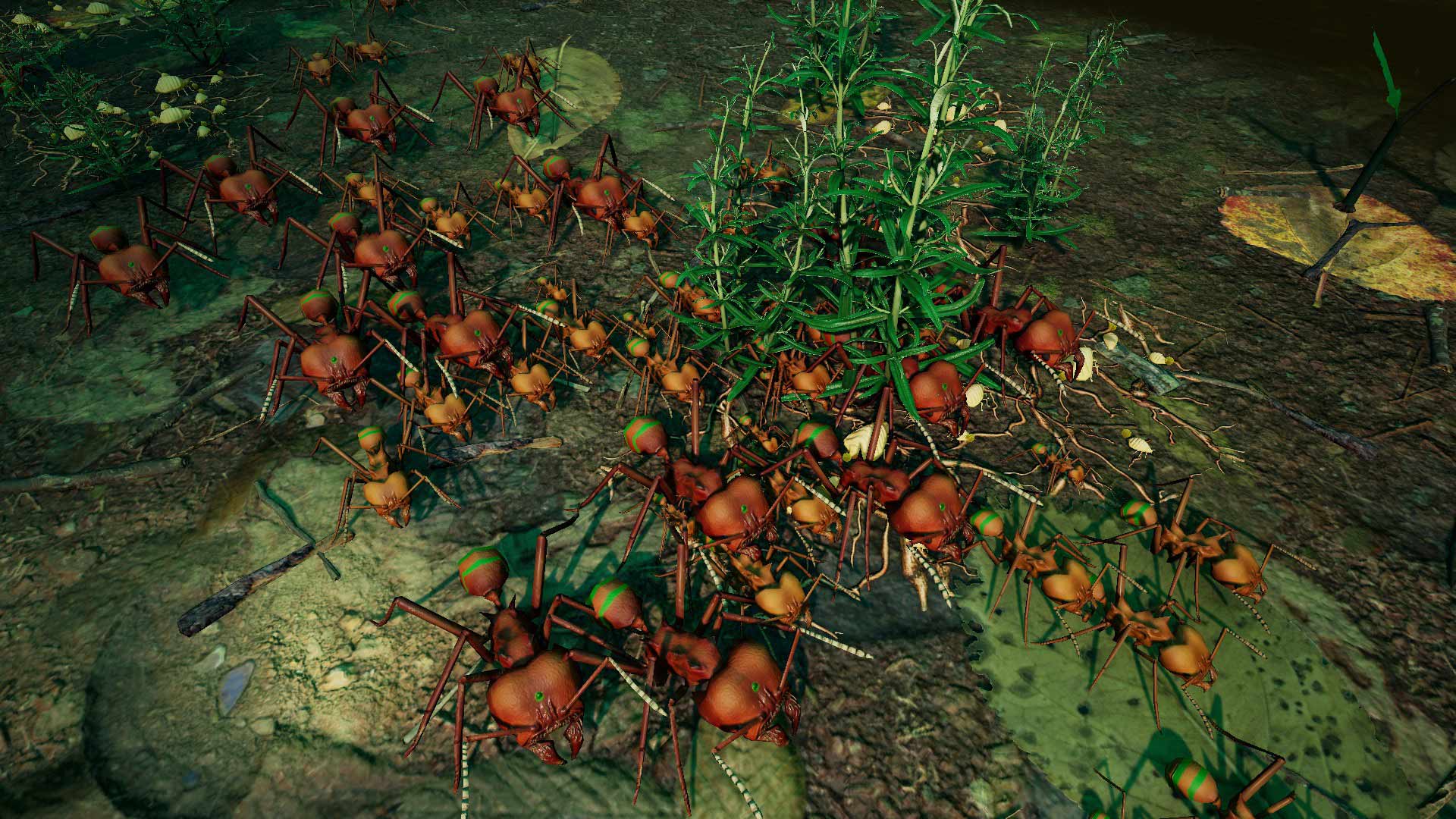 Welcome to 2020! We’ve been running an optional beta on Steam since late December which mainly introduces a reworked freeplay mode, and more recently adds the challenge mode for the third tier formicarium levels. Since that time we’ve been working through the veritable mountain of issues and other feedback with it, and we’re now in the home stretch for bringing this out of beta and to the main branch for everyone to play. There’s still time to join the beta if you haven’t already – see the instructions near the top of this link if you’d like to join in.

We’ll start this newsletter by talking about the changes to freeplay mode, then have a look at the mechanics of phorid flies in the campaign challenge mode. We’ll also talk about the first of the new extra missions to come along with the update – Aggrandise. Lastly, we’ll go over what has taken us many months to get to this point – the laborious changes to the movement and path finding code.

The update to freeplay will include leafcutters as their own independent colony type. When you play as leafcutters many of the landmarks that appear on the surface will be patches of leaves, since the sole source of food for them is their fungus gardens fuelled by leaf cuttings. This puts them at somewhat of a disadvantage at the start of a freeplay run, since they cannot attain food from underground and must quickly venture to the surface to collect foliage. To help with this, we have extended the exclusion zone around active nest entrances which should help leafcutter colonies get a foothold. Later in the run, the majors should more than make up for the humble beginnings!

To thematically celebrate bringing leafcutters to freeplay, we are also introducing a new rainforest-themed map! Embankment is set in the Ecuadorian jungle, like the third tier story missions, along the banks of a trickling forest stream which splits the map in two lengthways. You can of course play with any of the other species on this level, but I personally find it particularly satisfying to make a freeplay setup that only spawns wood and rainforest creatures, disable everything but the rainforest enemies, and immerse myself in jungle ambience.

A big change to the way freeplay works is that now as difficulty increases, you will get enemies that are scaled up in both size and strength, rather than just more enemies inhabiting the world. In this way we can increase the challenge without having a lot of creatures running around reducing performance. By mousing over the “menu” icon in the top right of the screen, you can see the current difficulty setting and will notice enemies getting quite significantly larger as it goes up.

Up until this point uber creatures have always simultaneously been the most interesting and frustrating thing about a freeplay run. They represent an immediate existential threat to your colony and only the foolhardy would underestimate their presence after it is announced. However, even for well-run colonies, an uber creature currently spells almost certain death unless you are very advanced into the game. Furthermore some colonies like Formica fusca can do very little against them. Whilst we certainly want players to feel that squirm of panic when ubers are around, we don’t want them to spell a definite end to proceedings.

In the current way of doing things, ubers spawn and immediately go about deciding if they’re going to attack the player or just mill around for a while. With the new update, there will be a grace period of eight minutes during which the uber will definitely not attack the nest – this gives players ample time to get home if they feel they need to or start to swarm the uber before it becomes invasive. Furthermore, they will no longer ignore the “Nest invasions” setting in freeplay so if you’ve turned invasions off, they will never threaten your queen.

On top of this, each uber in the game has been tweaked and changed to give it specific strengths and weaknesses. They’ve all had health and strength reduced somewhat – they are all still very strong creatures that need measured resistance, but they should feel much fairer now. This isn’t a blanket change to all ubers and each one has been tweaked individually, in both stats and abilities – we will detail these in the patch notes when the time comes. A lot of uber effects are based on AOE (area of effect) and a game-wide change to the way AOE works will affect just about every uber creature (there is now pronounced falloff of AOE damage from the epicentre of an attack to its edge – this incidentally also affects wood ant mortars).

When you set up your freeplay game, in the advanced options there will be a section that allows you to choose from several different ways to officially “win” your freeplay game, and to set a threshold for that goal. There are several of these, detailed below:

As you approach your goal you will notice difficulty increasing sharply, so be prepared for the onslaught! After you attain your goal you will be given your score – you can then either quit to the menu or continue playing, having achieved what was set. Well done you.

You will be able to alter freeplay settings to your heart’s content, save them as a preset, and easily export them to share with other players. Exporting works by creating a string you can copy to your clipboard, and importing works by reading such a string. Share on your medium of choice – in fact we’ll be making a dedicated forum thread for your favourite setups when the update is released.

Along with the freeplay update, we will be completing the third tier formicarium levels by introducing the challenge mode to them. Phorid flies are tiny, inconspicuous-looking insects that could easily be mistaken for fruit flies but are far deadlier. They lay their eggs between the armoured carapaces of insects, in particular your ants, leading to a time where they will be less effective followed by inevitable death.

All ants have a chance of fighting off the flies when they are attacked, but level 3 mediae and majors have a 100% chance to fight them off (there’s an incentive to get upgrading!). A successful defence will cause the fly to leave. They appear on the minimap as a distinctive fly icon – so try to keep clear of these areas unless you have no other choice.

We’ve long spoken about including extra levels apart from the main campaign, and with the coming update we’re introducing the first of these – Aggrandise. It has a simple aim – kill the giant whip spider.

There are no tricks here, no enemies hidden in caverns or surprise nest invasions. Simply start in the middle of the map, expand cautiously and use your knowledge of the game to decide which enemies to take down next for food. Once you have the forces, it’s time to take on the big guy.

In this level you command a Formica ereptor colony with access to wood ant mortars and, for the first time, trap jaw ants! These ants have a powerful bite and can use their fast-moving jaws to propel themselves out of combat, healing in the process. This makes them deadly close range units with impressive survivability for their size.

The primary focus of the coming update may be a rework of freeplay, but it is not the most fundamental change that will come along with it. For the past several months a majority of the work we’ve been doing has been completely gutting and re-writing the movement and path finding system that creatures use to navigate the map. Although this results in very few visible changes, it has been a monumental undertaking when considering the size of our small team – we’ve been replacing built-in Unreal Engine 4 functions with bespoke ones which are more fit for our purposes. We had used the default functions all over the project, and such a basal change to things is obviously going to have lots of issues. We’re nearly there in working through these now.

The primary motivation for all this work is optimisation – removing unnecessary calculations which reduce the frame rate and restrict the number of creatures that can exist in the world. We’ve previously announced that the focal species of the next formicarium tier will be fire ants, and we want there to be a lot of them – swarming over enemies and overwhelming them. As well as making current content smoother for everyone, the groundwork put into this now will improve everything for the future.

We’ve been delighted to see EotU get some great coverage recently, and lots of people have been getting lots out of the beta despite the issues it has had! Scottish streamer CnRNaggarock is a long-time player of Empires of the Undergrowth, and as far as I’m aware the only person with a documented win of the Hungry Spider Halloween / full moon level with video evidence (see below), we always get a kick out of watching his streams. Give him a follow on Twitter, subscribe to him on Twitch, and support his content!

So after writing a particularly long newsletter, I finally come to my favourite part – looking through a few of the fantastic screenshots you lovely people take of our game on a regular basis, making it look much better than it has any right to be. If you’d like to contribute simply upload your screenshots to Steam – F12 by default takes a snap. To get some interesting angles press F9 in-game to get to photo mode. If you hold down shift whilst you do this, the camera will be freed up for some really nice photographic potential. You can also email your snaps to me at mike@slugdisco.com.