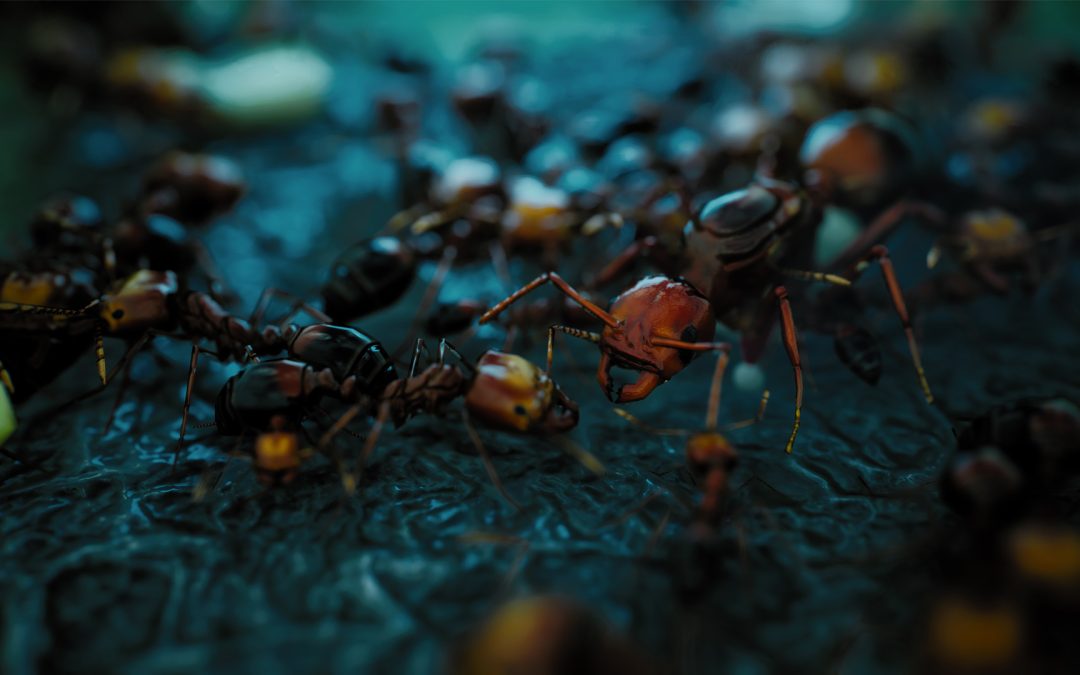 Welcome to the year of the fire ant! For those of you wondering how we’re doing with the 4th / fire ant tier, we’ve recently gotten the last of the dialogue and voice acting into the game, and sent things off to translators for localisation. Keep an eye on our social media for further public narrowing of our release window. As always we won’t give a date until we’re certain we can hit it. The marketing team have indeed been working on the trailer as the art team completes the detailing on the levels, and we’re positively itching to show it all off to you – but we have to be patient too.

Let’s talk about a few things that have come up over the last couple of months, including the exciting return of a creature long thought lost to the sands of time – the velvet worm.

Velvet worms were cut from the 3rd tier for time, since they used what was at the time a unique animation system for its trailing behind, which was not finished. Since two 4th tier creatures use this (the eastern newt and the dwarf salamander), we’ve been finishing and refining that system and we feel that once we’ve done with the 4th tier it would be a shame not to bring the velvet worm back into the fold.

Widespread in tropical South America, velvet worms are voracious, soft-bodied hunters with a special weapon they use to incapacitate their prey. When hunting, they use two specialised slime glands that are either side of the mouth, trapping the target in a sticky web of mucilage. This makes catching and consuming it significantly easier. In nature, it can also use this slime defensively, wriggling free of potential predators.

Like many of the game’s creatures, the velvet worm comes in different sizes, from a juvenile to an adult of 7cm in length, which makes it one of the Undergrowth’s larger denizens. We’ll be reintroducing the velvet worm to the 3.x levels at some point, as well as giving it an appearance in an upcoming extra level called Adventure. Both of these are likely to happen post-4th tier, since right now our focus is to get that complete and out to everyone.

Our environment artist Dan C continues to produce amazing swamp-related items for us, and one of his latest creations is the pitcher plant – the second carnivorous plant of the 4th tier. This swamp-dwelling flora has specialised leaves that grow into a jug shape, which it fills with digestive enzymes. The rim of the plant is slippery, making it a treacherous surface for insects to be scaling.

The plant attracts victims with enticing scents and sweet nectar – and there is a chance that a fire ant may escape with a prize, but the possibility of an unfortunate death is always present – and in more ways than one. This pitcher is the favoured lurking spot of the green lynx spider, and it’s always ready for an easy meal.

One of the peripheral species that will appear in the 4th tier is the little black ant, Monomorium minimum. They will be the smallest ants in the game – even the diminutive fire ants will look big besides them! To even the odds, they have a chemical and visual threat known as “gaster flagging” which will cause a debuff to enemy units caught in it, and they will not use it sparingly. The video below shows them attacking a group of fire ants – note the debuff symbols over the fire ant victim’s heads.

We were lucky enough to be sent a little present from Valve a couple of weeks ago, a Steam Deck developer kit. We’ve been testing all of the games we publish on it, and Empires of the Undergrowth runs exceptionally well without us having to make any modifications to the game when using Valve’s Proton system (software which allows a Windows program to run natively on a Linux operating system, like SteamOS that the Deck uses). This is a remarkable achievement for a hand-held PC equivalent, and it’s clear that Valve has made an exceptionally desirable product here.

There are things we’re working on to make the experience even better, such as including Valve’s controller glyphs, having a proper keyboard in the UI and creating an official control scheme. These will eventually get us the coveted “Verified” tick, but we’re not sure exactly when that will happen right now. Rest assured, the game works very well right now via Proton, and with some small tweaks and changes coming at some point in the future it will work fantastically.

Testing on the Steam Deck has opened us up to some of the shortcomings that the Linux build of the game has, and it is very clear that the best way to play Empires of the Undergrowth on Linux is through Proton as things currently stand. We’ll talk more about this over the next few weeks.

There has been some discussion on the forums (both the Steam ones and our official ones) about freeplay balance. In truth, freeplay is not in an excellent spot right now, since we’ve been focussing our attention elsewhere. This problem is likely to be compounded as we add more creatures and mechanics from the campaign into it.

There are a few reasons for us waiting to make any major changes to freeplay, and the most obvious one is that we’ve been working almost exclusively on the 4th tier for some time now (with the odd exception of some extra levels here and there, but development time on them is practically nil compared to the campaign. Another reason is that we will be replacing the existing AI in freeplay with a new bot system that has been developed for use in the remainder of the campaign levels. It is significantly smarter than the current implementation, and can more easily be tweaked to play like a player rather than the more rigidly-behaved colonies in the campaign. We hope that it will be possible to make them competitive without having to cheat – we’ll see how we do on that front!

The net result of this is that it would be inefficient for us to put much in the way of time into fixing freeplay as things stand, since our focus will switch to a pretty extensive overhaul of it once fire ants are released. This follows our usual development pattern of major release then interim update focusing on freeplay before the next major release.

In short, we hope to be able to make freeplay a much more balanced and enjoyable experience, but not until we reach the interim update period between the 4th and 5th (final) tier. Until that point, we are aware that things are not exactly right where they should be.

Thanks to everyone who played our winter-themed extra level Hibernation over the festive season! It’ll be sticking around permanently in extra levels, rather than disappearing like the Hungry Spider event levels. It features a unique resource – vegetation – and heating tiles, which must be stocked before the depths of winter arrive. If you haven’t seen it yet, check out the trailer below. The level features custom music and voice acting – a first for an extra level.

I just thought I’d clear up a little confusion with this level, since it comes up semi-regularly – you must have the specified stored vegetation in your heating tiles at the moment that the mid-winter hits. This is when the narrator says his “bleak mid-winter” line, and if you’re not at the specified level at that point the queen will inevitably freeze. So, that’s the targeted time you need to be aiming for!

Head on over to our Discord to submit your screenshots, it’s by far the easiest way – when the time comes to write a newsletter I’ll choose a few of my favourites to include! Alternatively upload them to Steam Community, or email mike@slugdisco.com. You can get some really nice shots by hitting shift + F9 to unlock the camera!