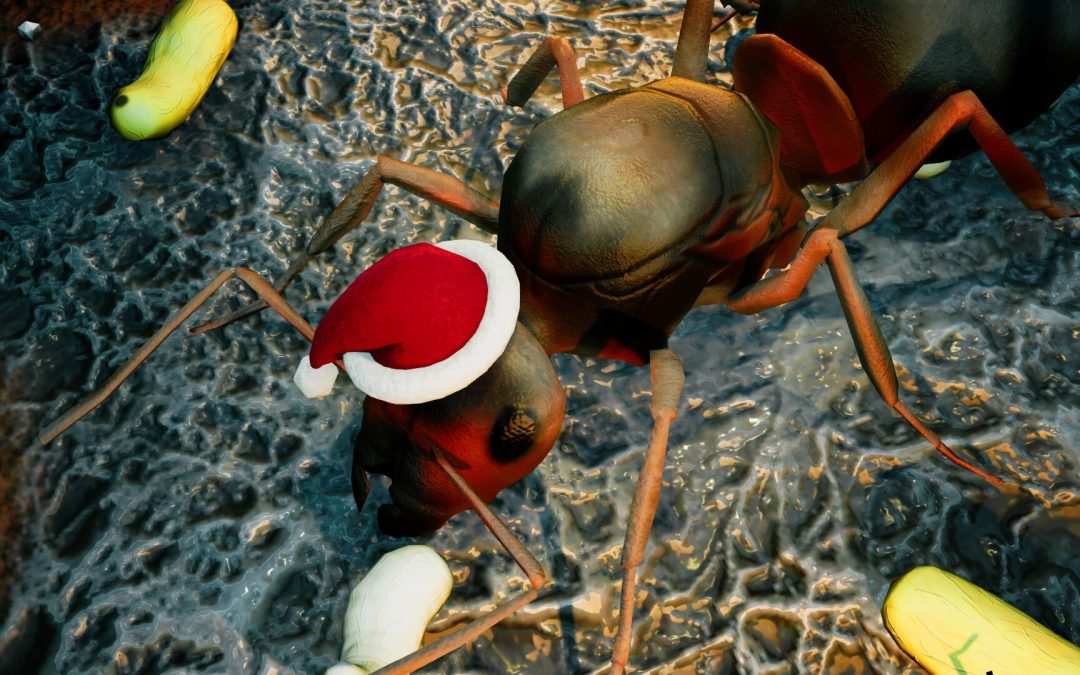 Hang on a minute, where on Earth did 2022 go? That whole fire ant update thing went by in such a blur. It still feels like it was last week, but it was very nearly six months ago now! Welcome to a brand spanking new year – 2023, which kicks off with several more extra levels in our ‘Sequel Season’, as well as a surprise or two along the way.

Before we get into upcoming stuff for EotU and things happening in Slug Disco as a company, I’ll just take a moment to thank each and every one of you for making 2022 by far the best year that Empires of the Undergrowth has had, in every reasonably measurable metric. We make this stuff, but it’s you who makes it a success and gives us the drive to continue. We hope to carry on with that energy in 2023.

Our Sequel Season of extra levels continues soon, with Tug of War 2 arriving in the next few weeks. Like its predecessor, it is a 1v1 versus an AI enemy where you build up an army with timed injections of resources, which will hatch at regular intervals and automatically battle with the opponent.

The surface layout is a little different than in Tug of War 1 (and with the swamp aesthetic), but the main difference here is the army composition. This time around you’ll have access to units such as little black ant soldiers and big-headed ant supersoldiers. This provides a markedly different experience to the first one, and will require different strategies to prevail.

We still have another few levels to go that are a part of Sequel Season, and we’ll continue releasing them a month or two apart until we’re done. We also have a new seasonal level that is apart from it, so let’s talk a little bit about that next.

In the near future there will be a new seasonal level appearing on the main menu. Like the gift and cobweb for the Festive and Hungry Spider levels respectively, a new object will appear whilst this level is available and must be clicked to access it.

Whilst seasonal, the only thing I’ll say about this one is that it’s not another Hungry Spider one. It’ll just appear one day on the main menu – keep an eye out for it, it’s gonna be a cracker!

Now that we’ve completed our rework of the look for the ‘rotting log’ levels, our environment artist Dan C has moved on to creating some higher fidelity assets to improve the look of the beach levels. We don’t have any finalised things to show you on this front just yet, but rest assured that the beaches will be adorned with a wider variety of plant life and the new sand will be more coarse, rough and irritating than ever!

When he first started working on new materials and textures for the swamp levels shortly after joining us at Slug Disco, Dan requested an expansion of Matt’s texture system to allow for different looks for the environment – the damp, reflective and swamp-like look of the 4th tier levels are achieved through this expansion. Expect to see that at work with the updated beach environment.

Work is continuing apace on fairly large changes to freeplay – probably the most notable of those recently is the addition of large creatures (bullfrogs, blue skimmers and huge whip spiders) as special, rarer-spawning landmarks in the mode. These large creatures, like in their campaign levels, will not represent an existential threat to your colony but do represent an area denial, as well as a food source once they’re defeated.

In the case of the skimmer, they will be a bit trickier – until their home landmark is happened upon by the player, they will be flying around the map – so you’ll be aware of their presence, but you won’t know exactly where their home turf is until you try to walk through it and it lands!

We’ve got quite a lot of work on the fifth tier of the formicarium very nearly ready to show off, but we want to make a bit of an event of the official reveal for the focal species for the final levels of the campaign. Several critters are complete and ready to show, but giving away even one of them will spoil a whole lot more by association!

A little while ago, we decided that we will do an official announcement, very likely with a video, showing the new ants and some of the new creatures when we’ve got some updated environments to show them in. Since we’re now working on the beach revamp, that’s going to be our milestone – we’ll use the updated beach to show off the tier 5 ants, even though that won’t be their final environment.

As always, we don’t really like doing much in the way of estimates (since we are so frequently incorrect with them) – we much prefer firm dates, or just dropping things out of the blue.

As far as where we’re at with tier 5 – the campaign levels are blocked out, and many specific one-off systems needed for them are being developed. Particularly exciting to see has been a sequence of events involving one of the new large creatures that will appear in one of the levels – but that’s enough about that for now!

We spoke about the ICS (Insane Completionist Slugs) Discord server a few newsletters back, but it’s worth mentioning them again now. They’re a small community dedicated to insane-difficulty completion and challenges that really push the limit in Empires of the Undergrowth, and they’re constantly working to beat what was previously thought to be impossible in the game, and more often than not they’re succeeding.

Some of the more recent challenges that have been worked on include workers-only runs of the entire campaign in increasingly higher difficulties, and even deathless runs (no loss of colony members) of individual levels – you have to be a specific kind of person to be able to put in the grind for this kind of thing, but if that’s what you’re into, then the ICS is for you. You can join their server at this link. They’re a friendly bunch and you’re welcome to join the server just to partake in their community, even if you’re not going to do all of the challenges.

In the past few weeks, we’ve had two new team members join us – please welcome Kaidi and Lin to Slug Disco, who are joining Mike & Dan P in the community management / marketing department. If you frequent services such as Bilibili, Tieba and Douyin, you’re likely to be talking to them in the future if you interact with our official accounts.

We will soon be adding a new project to the pantheon of Slug Disco-published games. As with all of our games besides Empires of the Undergrowth, we will not be developing it directly, but publishing it – meaning we are using some of our marketing resources to help get the game out to the world.

We’ll have a segment in the next vlog by Dan that talks to the developer of this project in a little more detail, and the dev hopes to have a playable demo ready before that time so you can get stuck in. We’re not quite ready to announce what the game is just yet – but we will be doing so very shortly. Keep your eyes on our socials later this month for the scoop!

Always the best part of the newsletter to write, this time around all of the entries for Screenshot Central come from the Steam Community page. That’s one way to get screenshots to us – another is to use our Discord, which has its own dedicated screenshot channel that is posted on by our regulars. I usually take the weekly Screenshot Saturday post from there.

A little tip – if you hold down shift whilst pressing your photo mode button (F9 by default), the camera is freed from the confines of the arena and you can get some very interesting angles using the controls!