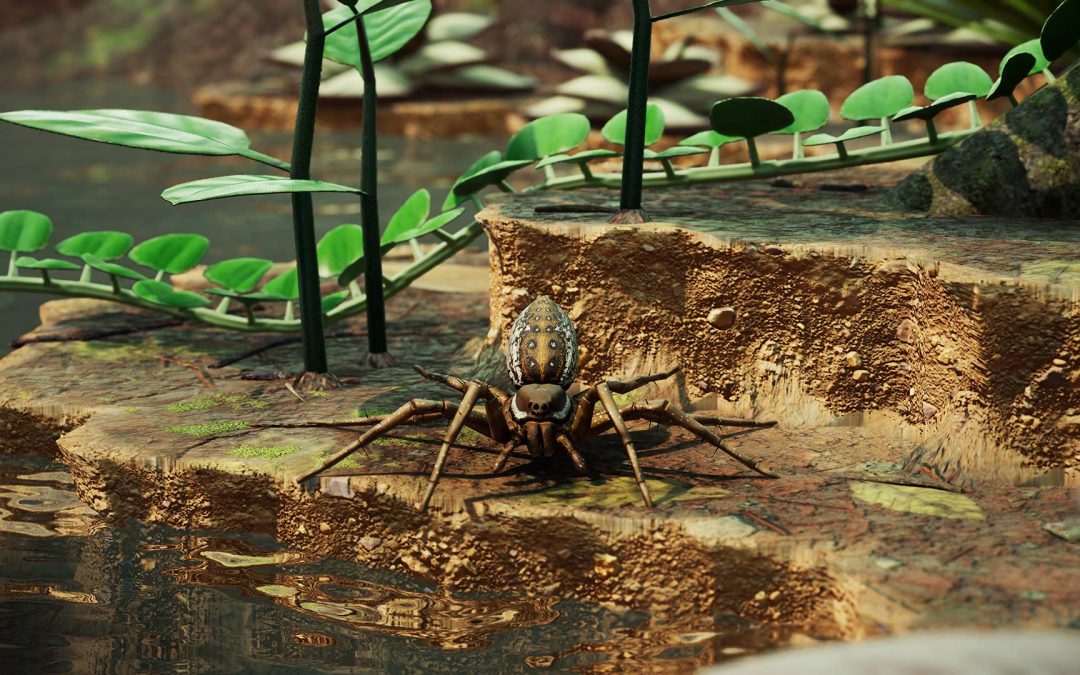 It’s been an important last couple of months for Empires of the Undergrowth, and those of us at Slug Disco Studios! Work continues apace on the fire ant update, and we’re not too far away from having all of the 4th tier creatures complete and ready for placement in the levels. We’ve also decided that now is the time to expand our dev team, and we’ve brought in a fantastic new artist to work on our environments – I’ll introduce you to Dan (yes, this is the 2nd time in the past year we’ve hired someone called Dan) a little later in the newsletter.

Last time, the creature feature was all about beetles. We’re (almost) moving away from insects for our newly-finished critters this time, into the world of spiders! We apologise in advance to any arachnophobes who already find looking at them difficult. There’s also a beetle larva to show that wasn’t ready in time for the last newsletter.

Spiders elicit fascination in us as much as they instil dread. What is it about the form of the spider that makes them so intimidating to us, despite very few of them posing any real threat at all? Perhaps it’s the unpredictable stop-start movements they make. Maybe it’s that they’re all business at one end, many eyes and fangs staring right back at us. Or is it that, despite our intelligence, deep down we know that nature perfected functional physical form long before our ancestors could sharpen a stick? Whatever the reason, today we have three spiders to introduce that will battle your fire ants in the 4th tier levels!

The green lynx spider (Peucetia viridans) lurks in foliage, using its pigmentation as camouflage. It is an active hunter, seeking out prey rather than building webs, in a similar way to wolf spiders. It can also defensively spit venom a long distance – a very rare adaptation, and we felt this trait made it ideal for our game.

Like all three of the spiders being introduced in this newsletter, it is what is known as a “true” spider, being a member of the order Araneae. This is in contrast to, for example, the whip spiders of the 3rd tier, which are arachnids but not true spiders.

The magnolia green jumper (Lyssomanes viridis) hunts using excellent eyesight & powerful back legs that allow it to jump many times its body length. It will be the 2nd jumping spider in the game, after Psecas viridipurpureus from the 3rd tier.

Jumping spiders are highly intelligent, even curious in nature, carefully observing targets before making the decision to pounce at the opportune moment. They represent the largest group of Aranae (true spiders).

The six-spotted fishing spider (Dolomedes triton) is a large semi-aquatic spider native to North America. It lurks near the bank, exploiting a hydrophobic (water-repelling) coating on its skin, surface tension and air bubbles to stay afloat. It can lie in wait (float in wait?) patiently for many hours for a suitable prey item to drift or swim to within striking distance.

Its prey includes insects (both aquatic and ones that have fallen into the water) and small fish. It is capable of fully submerging itself for a time, breathing from a pocket of air it takes with it. Air bubbles that get trapped on its body mean that as long as it is not submerged for too long, it will emerge completely dry.

The fishing spider will be the optional challenge creature for the 4th tier levels – this means it is likely to not be in the game with the initial release of the fire ant levels, but added in after in an interim update between the 4th and 5th tiers (following the pattern for the 2nd and 3rd tier challenges).

And to finish off our creature reveals for this newsletter, let’s leave the world of arachnids and return to a beetle we’ve talked about before, but this time in larval form. Like many ground beetles, the larval form of the false bombardier beetle (Galerita bicolor) is as voracious a predator as the adult.

A couple of months back we recruited a new member of the Slug Disco team – working alongside Matt on environments for upcoming levels of Empires of the Undergrowth (and perhaps adding his touch to existing ones) is artist Dan Coates. I asked him if he wouldn’t mind introducing himself as a team member, so here he is in his own words:

My name is Dan (Dan.C/Dan 2) and I’m the new Environment Artist here at Slug Disco! This means I’ll be working on some seriously cool level art for EotU and any future projects (spoilers). If you want to get in touch I’m over on the Slug Disco Discord, you can also find me on Artstation where I’ll be posting how the assets for EotU were made, as well as some personal projects! And if you’re interested in seeing what an Environment Artist with an irrational fear of spiders looks like, make sure to tune in when we stream EotU! Keep an eye out for future screenshots and environment updates, I can’t wait to share with you what we’ve been working on!

The most pressing concern for our new environment artist is of course the look of the Green Swamp, the nature reserve in North Carolina in which the fire ant levels are set. So far Dan has nearly completed work on the underground look for the levels, deciding on a teal glow to contrast the red of the critters themselves.

It’s early days yet and there’s lots more to come, but check out the general aesthetic that Dan is going for in these in-engine shots. One really big advantage of joining a small team is that you can have a quite sizeable influence on a project, and we’re looking forward to seeing Dan really get his creative teeth sunk into Empires of the Undergrowth.

I’ve found it to be a lot of fun to do size comparisons like this every so often, to give people some perspective of what to expect when new content arrives. The fire ant levels will feature our first official titan-class creature – the great blue skimmer – so here it is in comparison to some of the other new arrivals coming with the 4th tier.

Here’s one which is more thematic, given the “spiders” feel that this newsletter has! It should give you a clear idea of how our new green lynx spider compares to the big boys. The huge whip spider still reigns supreme in terms of sheer bulk, but the lynx gives the juvenile form a run for its money!

A couple of weeks back, Dan P (our marketing content creator) and Liam (dev) sat down to have a deep discussion about the colony AI systems in EotU, and the incoming changes that will be happening to them along with the 4th tier. Liam has been working on a much more flexible, modular AI system for the game, which will be used in all of the remaining campaign levels to varying degrees and will eventually find itself transplanted into freeplay, allowing for much more sensible decision making by the AI colonies in that game mode. Take a look at the vid if you’ve got a spare hour!

Whilst it’s often very appropriate to have more heavily scripted AI colonies, as in 2.2 or to a lesser extent in 3.1, the more generalised approach feels like it’s been worth the effort for us. Such a tweak-able system will be extremely useful for any future content we create, from potential post-release additions to future extra levels.

Think yourself pretty handy with the photo mode tools (F9 by default)? I’m always glad to see them sent my way. By far the easiest way these days is to join our Discord; friendly nature-loving gamers guaranteed! We have dedicated screenshot categories for all three of our games. Alternatively, you can email your snaps in (mike@slugdisco.com). Let’s have a look at this month’s selection!