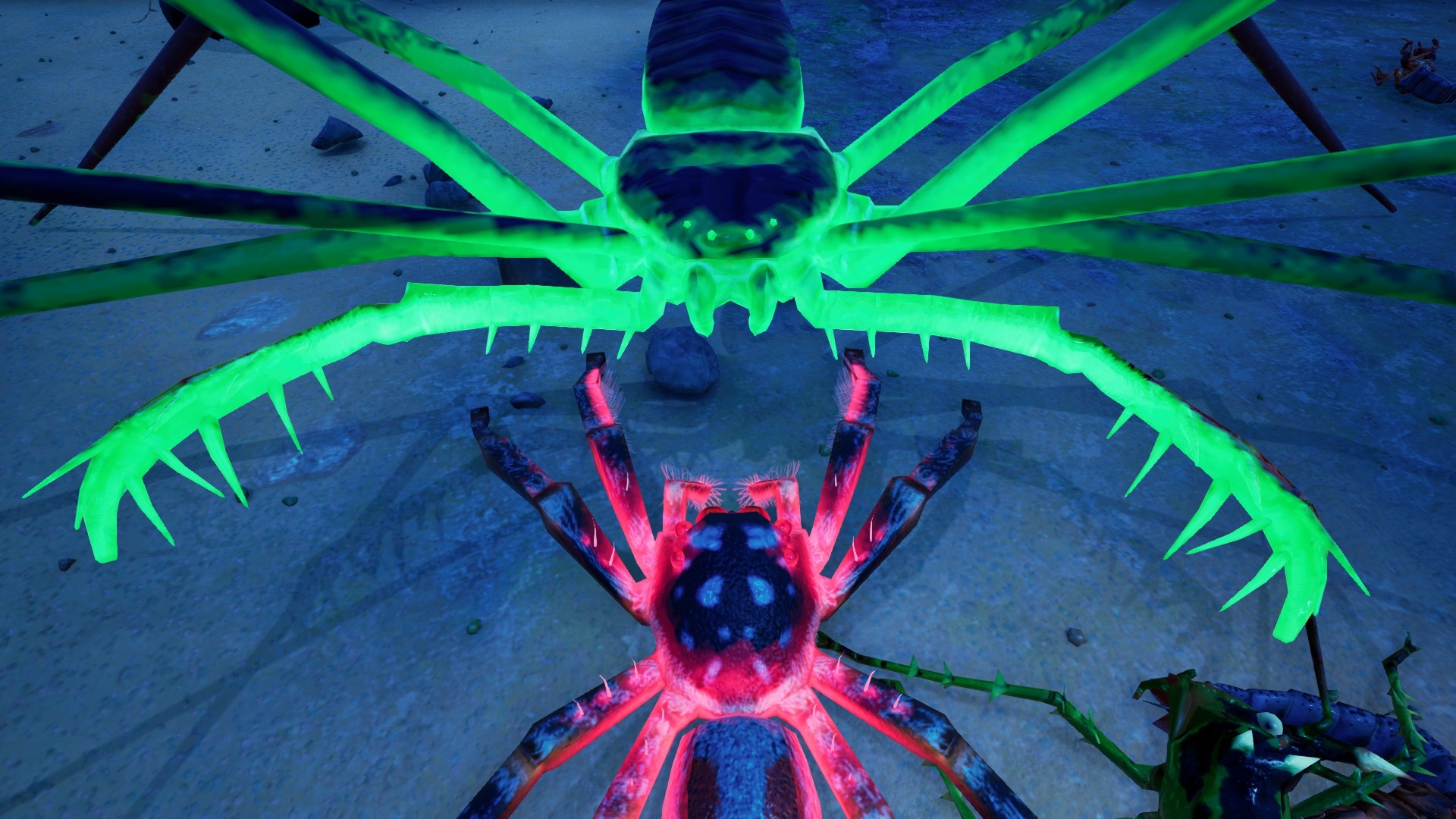 The last couple of months have been focused on some complicated systems for the fire ants as well as some large changes to freeplay, which are currently in an optional beta for Steam Windows users (details below). Whilst complex from a game design point of view, the extensions to the movement systems needed for the fire ants is getting there. We’re close to having the fire ant bridge building system the way we like it!

Whilst Liam and Matt are dealing with the complexities of fire ant systems, John has been adding some much-requested features to freeplay, most notable amongst them being AI colonies to battle against or with! Although they’re in an early form right now, they will be improved on over time. Let’s start this newsletter properly with details on the freeplay colonies.

It’s probably the most requested feature for freeplay, and it is now in an optional beta phase – AI colonies are being implemented properly into freeplay. In their early form, their intelligence is fairly basic but is being improved on iteratively with each update. As things stand, the player can choose up to 3 AI colonies to be active in their game, and can put them on different teams as they see fit. The AI has various levels of options to allow it to cheat – this helps level the playing field against human players. Over time, we anticipate most players will reduce the AI cheating level as we get better at making them cleverer.

We’ve been running the optional beta for the AI colonies for a few weeks now and the feedback has been invaluable. We expect the beta to last for a few weeks longer yet at the time of writing (early September 2020) so if you haven’t participated yet and would like to join in then please follow the instructions near the top of this post. You will need to be a Steam Windows 64 bit user to access the beta. Please note that for the time being freeplay saving is disabled in the beta; this is because we’re still working on everything needed to fully save the AI’s brains.

The AI colonies add a lot of fun and replayability to freeplay, even in their first implementation. In the future, there are lots of things we would like to do to expand their functionality. At the moment, the AI uses a pre-built nest plan but there is a system we worked on a while back that could eventually allow AI to design its own underground, regardless of the map layout. Don’t expect this system to be active in the near future but it’s an example of where we could go with things.

As mentioned, fire ant progression is continuing apace. The expansion to the movement systems (and bending of the pre-established game rules) that things like bridge building requires has taken up a large chunk of our recent development time! Below, you can see a video we posted recently that shows how the fire ants form a floating bridge – they link together, walking on each other’s backs, until they reach the other side of the gap they are intending to span. A bridge can be constructed at set points on a map to reach territory and resources otherwise unattainable. Once a bridge has served its purpose, it can be dismantled and the ants that formed it are freed up to act normally again.

You can see in this short video we posted a few weeks back how things are improving with this system; compared to a few weeks ago the ants no longer queue up to form the bridge and it happens a lot quicker than it did before. There are still plenty of tweaks to get there to make it look a bit more natural and fluid, but we’re pretty pleased with the results so far!

The fourth tier levels will take place in a swampy area of North Carolina in the United States. We’ve already talked about some of the wildlife you’ll encounter in these levels in a previous newsletter (for example the Venus fly trap and the bombardier beetle). We thought we’d reveal another creature in this newsletter, and it’s an interesting one – the red velvet ant (Dasymutilla occidentalis)! This distinctive insect is named for the bright red fuzz that covers its back.

Despite its name, it is not an ant at all but instead a species of wasp. The female of this species is wingless, and given the close relation between wasps and ants you can see why it is often mistaken for an ant. The bright colouration should be a warning of its nature – it has an exceptionally painful sting, earning it its nickname of “cow killer”.

There are lots more creatures that are coming in the 4th formicarium tier, in fact it will feature the largest creature count so far by quite a way. Amongst these are titans, huge creatures that have some special rules applied to them. We’re not ready to show off any of those yet, but we will talk about them in future newsletters closer to the time!

The next extra level, Tug of War, has been in beta at the same time as the AI colonies in freeplay. This is an auto-battler mode where your strategy comes down to the placement of tiles in your nest. Periodically, you will be given an injection of resources, as will your AI opponent. Eggs will hatch simultaneously on a timer, and the idea is to push back your enemy to their queen and kill her! It’s a game mode that harkens back to Empires of the Undergrowth’s origins; this is not too far from what the game would have been like when it was first envisaged as a game for mobile devices back in 2014. We’ve come a long way since then, but it is nice to return to our roots with this one-off game mode. It will be released as a new extra level with the next non-beta update.

We’re also working on the next extra level after that, called “Adventure” – John’s been streaming some development of this level for some time now, and it looks to be another unique level altogether! More information on this as we get close to releasing it.

In early August, we took part in the Yogscast Tiny Teams festival! This was an event that highlighted some of the really neat work that’s produced by teams with 3 or fewer core members. As well as some of the better known ones and their own selection of titles, the festival featured lots of lesser known titles such as our own. Although it wasn’t part of the festival, Tom of the Yogscast has been streaming Empires of the Undergrowth on his Twitch channel recently and as someone who’s been following the Yogscast for nearly a decade, I consider that a personal accomplishment for us!

We’ve been spoilt for choice for Screenshot Central this month! Some excellent stills and it’s great to see more of you guys using photo mode to get some nice angles for your snaps! F9 by default enters photo mode; if you hold down shift whilst you press it you get an unconstrained camera for ultimate creativity! Take shots through Steam (F12 by default) and upload them to Steam Community if you’d like us to feature them in a future newsletter. Alternatively, you can email them to mike@slugdisco.com and I’ll check them out.