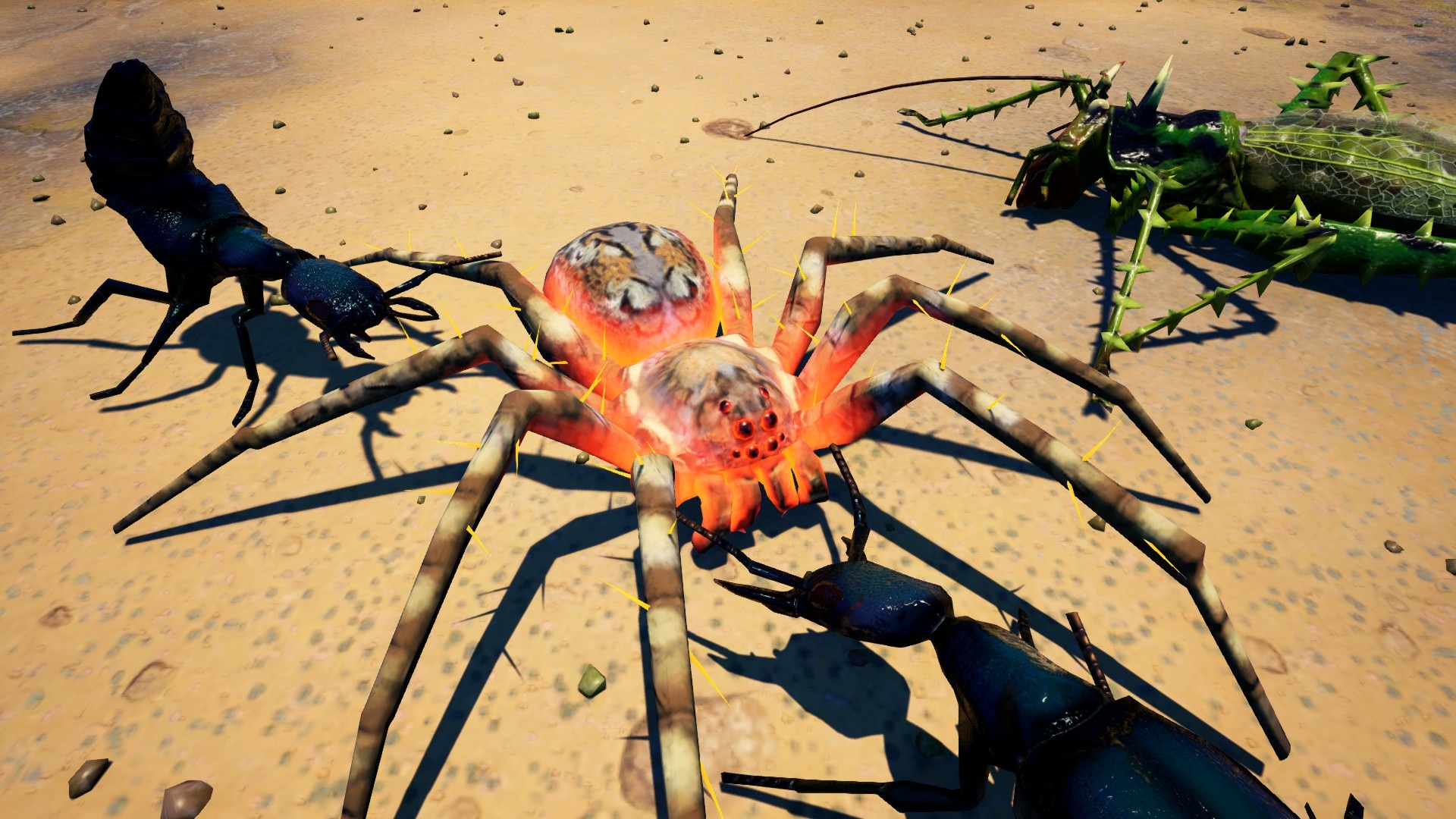 Welcome to our March / April 2020 newsletter! First of all, I’ll address the corona-elephant in the room and hope that you and your families are staying safe during the lockdown. Let’s all remember to be kind to everyone, especially to ourselves, during this pandemic. Let’s hope things return to normal in a safe and steady manner. Play some video games, read a book, keep in touch with your loved ones, stay indoors when you can. Now, on to slightly more cheerful matters – including a new game that is joining Ecosystem as a Slug Disco publishing project – Beetle Uprising!

A month ago we released the 0.21 update for Empires of the Undergrowth. This update concentrated on an overhaul of freeplay mode, but more fundamentally it included a near-complete rewrite of the crucial pathfinding and movement code that all creatures in the game use. It’s difficult to exaggerate the importance of this change, as well as how fundamental it is to the game.

It took us many months to get to this point with it, since it replaces nearly all of the default Unreal Engine equivalents (which are excellent built-in functions but not ideally suited to our purposes) and thankfully there don’t seem to be any major issues with the new system. Thanks so much to everyone who helped us test these updates – in particular HofNerd on our official forums, who I think has submitted more bug reports than everyone else combined!

On 24th April, a second extra level was added to the game to join Aggrandise – Baby Sitting. You can find the extra levels, which aren’t part of the main campaign, from the “Other Modes” option on the main menu. We will be adding to these regularly – we’re aiming for a month apart for them, but it might sometimes take us longer (hence us calling them “regular” rather than “monthly” – you know how it is with game development!).

For the first time in the game, Baby Sitting introduces allied colonies. In real-world nature, Formica rufa (wood ant) colonies often form large super-colonies, where an individual nest buds off from a larger one when queens move to a new location. Although they often have different birth queens, the ants recognise the pheromone signature of their cousins and sisters, and operate as one.

In this level, you take command of a queen who has recently relocated to a new nest, apart from the larger colony. One of her sisters has also set up nearby – her ants are controlled by an allied AI. However, the sister nest’s offspring are not quite as wily as you are – they will need help to survive! What they lack in intelligence, though, they make up for with fearlessness. They will charge to your aid when they think you need help, and may take on challenges a little beyond their capabilities. As the wiser of the colonies, it’s your job to make sure they don’t bite off more than they can chew – kill all enemy creatures and keep both queens alive to complete the mission!

Next time for the extra levels, there will be a mission called “Extremis” – which is a wave-based survival mode with a rogue-like twist. Other maps in the works include a mode where you’ll play as the other formicarium colony from the 3rd tier challenge and a tug-of-war style map, which is rather like the very first implementation of the game we made way back in 2014, when it was still a project for tablets and mobile devices. Keep an eye on our Twitter and Facebook for more info on extra levels.

As you’re aware, the species of the 4.x formicarium tier will be fire ants. Now that we’re tackling the very last of the issues with the new movement and pathing code, we can concentrate on the next batch of preparations for the fire ant levels. A while back we completed the final list of creepy crawlies we’d like to include in these levels, and whilst we can’t be sure they will all make it into the final build (the sadly-cut velvet worm from the 3.x levels is testament to this) we would like to share the names of a couple we’re pretty sure will make the cut, as well as the setting we’ve homed in on for these level – North Carolina in the United States.

The determining factor of where we’d like to set our fire ant levels was dictated by the natural range of this fascinating plant. Because of the range of the Venus flytrap (Dionaea muscipula), the fire ant levels will be set in the swamps of North Carolina – more specifically an area called the Green Swamp Preserve. Fire ants are not native to this area, but are invasive to it as they are in many parts of the world.

I scarcely need to introduce the iconic Venus flytrap to you – it is by far the most famous carnivorous plant at least in the west, with dramatic traps that use a trigger system to close and trap insect prey. Nectar is secreted on the surface of the traps, but if an insect touches two of the trigger hairs inside, its fate is slow digestion. Lovely! Mechanics will evolve with development but it seems likely ants will be able to collect nectar from the traps, with a chance of triggering them.

Firing hot, noxious liquid from the end of its abdomen, the bombardier beetle lives up to its name. There are many kinds of these ground beetles – this one is specifically Brachinus alternans. They hunt other insects at night, but are also remarkably social – they will tend to congregate with others of their species when not actively looking for food.

When threatened, these insects can unleash a mix of two chemicals – hydroquinone and hydrogen peroxide – which very quickly gets to near the boiling point of water. As the hot gases expand, they are ejected explosively from the end of the abdomen, often with a distinct “popping” sound. This may inflict a mild stinging burn to an amphibian or bird, but will certainly be fatal to any small insects threatening the beetle.

We’re not quite ready to show finished artwork for these yet, but as always, follow us on our Twitter and Facebook and we’ll be sure to start sharing things with you all as soon as we can! The bombardier beetle is a convenient segue into the introduction below…

About seven months ago, we announced our partnership with our friend Tom Johnson, who is working on a complex evolution-based sandbox game called Ecosystem. Although we’re not developing the project (it’s entirely Tom’s baby) we are acting as the publisher for it through Steam and other platforms. During our time developing Empires of the Undergrowth, we’d like to think that we’ve learned a few things about media and marketing for a nature-based game project, and we’ve kept our eye out for projects that fall under this banner. We’d now like to talk about Beetle Uprising!

Beetle Uprising has been on Steam for some time now. John and Mike played it on a live stream at one point – we’ve had a friendly rivalry with Iocane Games (who are developing it) ever since we heard that in the game you can be awarded a trophy commemorating beetle dominance over ants. Whilst we were expecting an enjoyable mix of Sims-like home building and real-time tactics (RTT) combat, we weren’t expecting the deep complexity of its genetics breeding system, which kind of blew us away. These systems are remarkably close to real-world genetics, with all the subtleties of genes, alleles, gametes and all those words you’d nearly forgotten about from school.

We thought this game really deserved to see the light of day more than it had, so we got in touch with the guys at Iocane to see if they’d like to work with us to that end, and to our delight they did. We’ve been advising them on getting a demo up for the game (in a similar vein to the one we have for Empires of the Undergrowth and Ecosystem) and improving its website and the like. The demo is available now to download from IndieDB, follow this link to download it from IndieDB, and also the project is near completion and can be purchased from Steam! The demo is currently in the review process on Steam – once it’s been approved, this newsletter will be updated to reflect that.

We really hope you give the demo of this surprisingly complex, genre-defying genetics / home building / tactics game a go, and if you enjoy it support the project. The Iocane guys are looking forward to your feedback on this game – jump into the discussion forums on Steam or on our official forums to let us know what you think. Now, back to regular programming!

This time in lockdown has been a bit difficult for us all – even I, who normally only likes to actually leave the house a few times a week, have found it difficult not being able to walk my dog in the park very often or even just be out in nature for a short while. I thought the time we have indoors would be a great opportunity to concentrate on community-submitted screenshots, so that’s what I’ve been doing for a few weeks on Saturdays. Here’s links to the Twitter posts for them, each week following various themes. I’ll do a few more of these whilst the pandemic is ongoing, so if you’d like to suggest a theme for future weeks please comment!

And finally, my favourite part of the newsletter – as I have done for the Community Screenshot Saturday, I trawled through recent submissions to the Steam screenshots section of our community tab, and submissions directly to me mike@slugdisco.com. No particular theme for these ones, I just select ones that look the most striking. To take a screenshot, press F12 (by default) in-game. To get a really nice screenshot, press F9 to enter photo mode with camera controls, or press shift + F9 for a completely free camera.