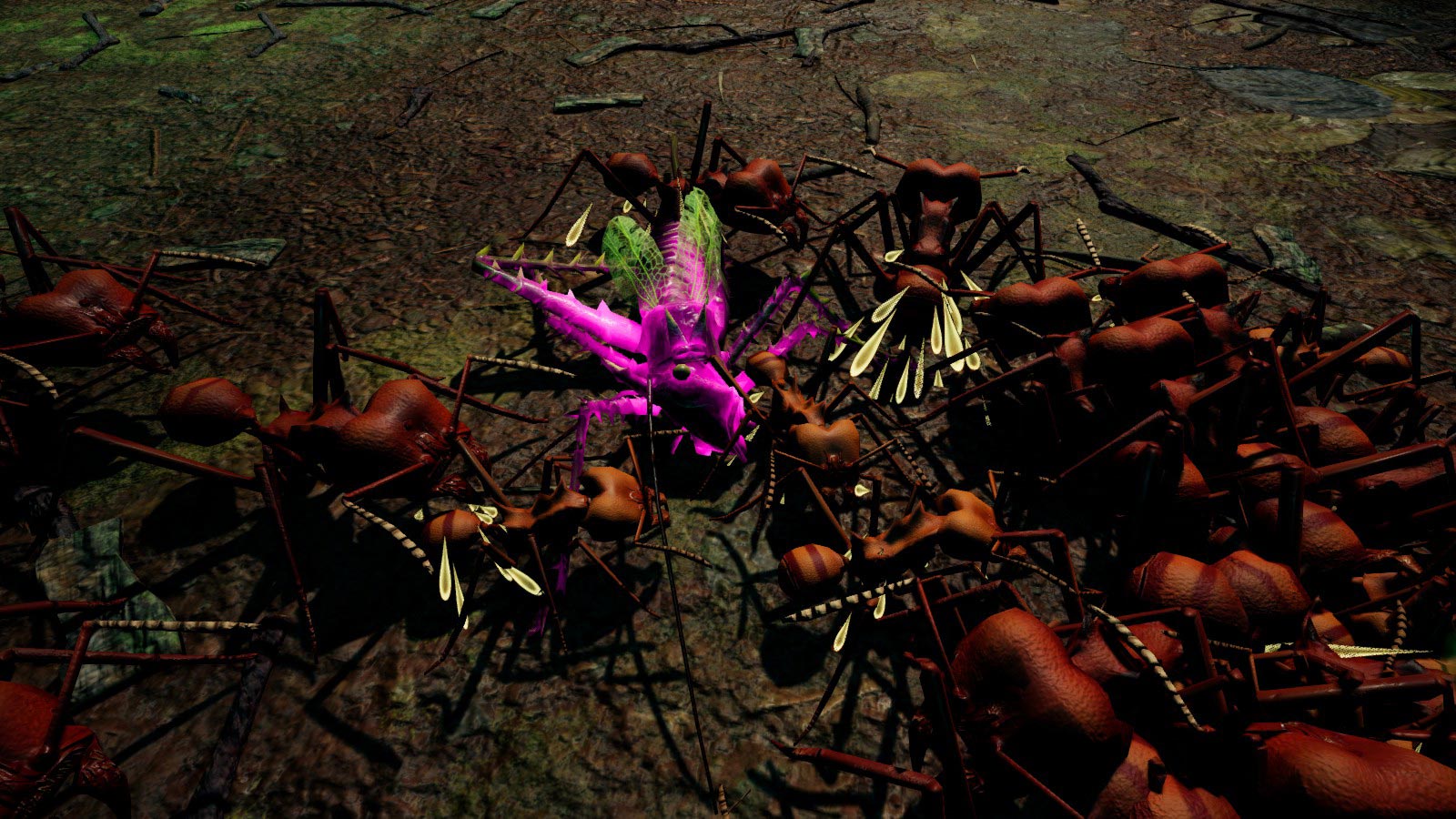 During the last few weeks we’ve been able to really crack on with the fire ant update. After the long and arduous process that was re-designing the game’s movement code from the ground up, we’re really glad to be concentrated nearly solely on our Solenopsis invicta ants and all the accompanying flora and fauna that will bring them to life. As is always the case when we add a new formicarium tier to the game, there are several new systems that have to be designed and those are also in the works.

It’s important to note that although this newsletter will concentrate mainly on the fire ant update, as a matter of policy we do not do estimates for the timings of our updates. That’s because historically we’ve been pretty terrible at even guessing these, and given the small size of our team it’s better for us to be 100% sure we can hit a deadline before we announce it. At the moment the best we can say is it’s a while off yet, but as soon as we have a date we’ll be very loud about broadcasting it!

Whilst he’s our engine specialist and deals with lots of deep-level gubbins of Unreal Engine 4 which powers the game, Matt is also our artist. He’s recently been working on the models and animations for the fire ants – the first one here is of the fire ant queen. By comparison to the existing queens in the game, she’s positively miniscule!

Below shows the queen next to some fire ant workers. There’s a direct side-by-side later in the newsletter but they’re comparable in size to Atta cephalotes minims. They’ll do the nest jobs – digging and tending to brood. Fire ants will be a swarm-style unit – small, individually relatively cheap but high in numbers.

Fire ants will also have a soldier unit. These are significantly bigger than the workers and will specialise in fighting, in a similar way to the Formica fusca black ants currently in the game. In our research for fire ants we’ve found that there’s significant debate amongst myrmecologists about the existence of true fire ant polymorphism. Whilst there are a range of sizes, there does not appear to be discrete castes in the way that, for example, leafcutters clearly have. For this reason, we are simplifying things and calling the larger ants “soldiers” and the smaller ones “workers”.

Fire ants get their name from the burning sensation their sting delivers- ouch! In-game, as well as their regular bite attacks they have a sting which they will use periodically. The bite will deliver regular physical-type damage whilst the sting will deliver venom-type damage. Below is a short video showing off the animations for these attacks.

The system that will allow these ants to swarm over larger enemies (titan climbing) is still in development but they have their own unique animation for that too, whereby they will bite hold of the victim and deliver several stings in quick succession. We’re looking forward to showing off this system once it’s closer to completion – it’s one of the main new mechanics that will enrich the game and differentiate the fire ant update from others.

Fire ants are, for the most part, quite small in stature compared to other ants in the game. In the below pictures you can see the level 1 worker being slightly smaller than the leafcutter minims, which are currently the smallest ants in the game.

Pictured below is a rather unfair comparison – the largest queen (again, leafcutter) versus the smallest. Do not be deceived by the small stature of the fire ant – they’ve earned their name!

The fire ant levels are set in the swamps of North Carolina in the USA. As such, the levels will feature a lot of water. Back when we did our Kickstarter, one of the stretch goals was to include fire ant bridges as a gameplay mechanic. That goal was reached, and Matt has been puzzling out the details in his head ever since. We’re not quite ready to show off the results of this yet, but there’s an offshoot of this mechanic that has expanded things significantly.

There are of course many creatures that swim in or on the surface of still water, the latter exploiting surface tension to avoid sinking. Liam, the developer who’s been working on this system, has shared the below picture and paragraphs explaining the technical details.

“In anticipation of floating fire ants in the next update we have been tacking on some upgrades to our new movement systems to allow creatures to do a few things that were previously impossible. While we were at it, it seemed a shame to have the realm of water limited to fire ants and so we loosened the rules a bit to potentially support a few other water-faring critters.”

“To start with, the navigation rules in the game have always been based on a single, connected, immovable mesh (a structure that informs the navigation system). This was the first problem to overcome as if water is a ‘walkable’ surface it could create routes to previously unconnected zones. Now instead of being connected or disconnected, meshes are now members of zones that can be linked or separated.

Next, we needed to account for water being able to rise and fall. On the campaign levels Rising Tide and Queen of the Hill, the water is very dynamic and we wanted to be able to keep this sort of movement as an option. The plan at the moment is to do this with multiple static layers of mesh, rather than having a single layer of movable mesh. Layers are generated for every height the water is expected to reach and baked into the level data (‘baked’ here means pre-calculated and included in the level file).”

Following suit from previous species, fire ants will have selectable types for their soldiers. Like with the wood ant ranged units (mortar or rapid fire) and leafcutter majors (stun or taunt), on starting a fire ant level you’ll have the choice to take one of two kinds of soldier into battle with you. Fire ant abilities encourage aggression, which is very true to their nature. They’re detailed below:

Pervasive – if pervasive soldiers are selected, hatching new soldiers after the previous ones have died will be free if the egg has been on the soldier tile for a set period of time. The exact time will be down to balance, so we’ll decide on that when we’re in a position to properly test them.

Vigorous – soldiers with this option will have a buff to their stats (attack damage, speed and health) for a time after they are born. Again, the exact time and buffs will be down to balance.

As you can see, these abilities encourage aggression and you are actively rewarded for spawning new ants as the old ones die. It wouldn’t be very fitting of the reputation of fire ants to be retreating into their nest to hide from danger – much more becoming of their character to attack it until there’s no longer a threat!

Can it be done? Formicarium Challenge 2

A question was asked on our Steam forums – is it possible to complete the formicarium challenges using only workers? We knew it was possible for Challenge 1 – in fact there’s an achievement for it. We weren’t so sure beyond that; and in fact said we’d only believe it given video footage. Cue Phoenix7786, who proved beyond a shadow of a doubt that Challenge 2 can be done using only workers, using a very simple yet clever nest layout and appropriate queen abilities.

Always my favourite part of writing a newsletter – if you’d like to submit a nice screenshot for this part of the newsletter, simply upload it to Steam (by default F12 takes a shot – you’ll be given an upload option on exiting the game) or email it directly to mike@slugdisco.com. F9 activates photo mode for artistic composition!