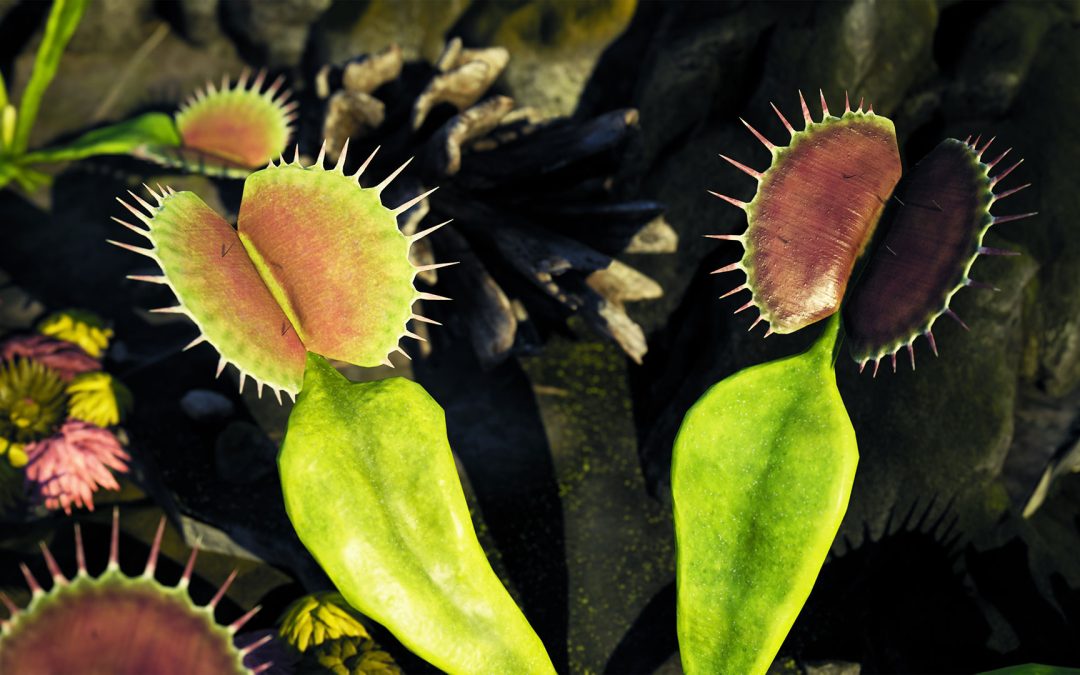 Welcome to 2021’s last newsletter! We’ll get straight to the point about where we’re at with the fire ant release plans after this introduction. We’ve also got a very special extra level set to come out shortly before the holidays next month – so plenty of details on that. There’s a final creature we want to show off, some finished animations and game mechanics for a creature revealed a while back, and some finished artwork for the swamp environment in which the 4th tier will be set, as well as the first of our carnivorous plants.

Those of you who have been following along on our social media and particularly our Discord will probably have gotten the impression over the last few months that we intended to get the fire ant update out before the end of the year. Indeed these were our plans, and obviously shortly before Christmas would have been the ideal time for that – but we’ve realised that we won’t be able to hit that goal.

As is always the case with game development and ambitious projects, pinning down how long things take is exceedingly tricky. What would appear to be an easy task ends up taking a long time, unexpected complications arise, and priorities change. We are confident enough at this point to say that the update will come in early 2022, but exactly how early is yet to be finalised.

Our marketing team will be getting together soon to work on some promotional material, and a short while after this we will have a much better idea of when we’ll be able to give you a date for the long-awaited update. Expect some more firm news on this before the end of the year!

We can let you know that we’ve been working with the voice cast again recently, and it’s been great hearing new words from devious scientists and sombre narrators again. We took advantage of this fact to have the narrator record some extra voice lines for a new extra level. Which leads us on to:

Although we realised we wouldn’t be releasing the 4th tier this year, we still wanted to do something a little special to close out 2021. Many of the extra levels are rather fanciful, playing fast and footloose with reality and we get very silly scenarios such as Beetles Rise Up! Not so with Hibernation, which will play out much more like a campaign level and is based on a real-world scenario. In it you play as wood ants living high in alpine mountains – where winters are harsh and ants must adapt or die.

It will be arriving shortly before Christmas, and it’ll be the first extra level to have completely new narration and music. Liam has snuck plenty of Yuletide-themed tunes in the new music! Here’s a little preview of that:

To survive and compete against nearby colonies, your wood ants will have to gather not just food, but slow-decomposing vegetation as well. As vegetation is broken down, it releases heat in much the same way a compost heap does. Decaying pine needles will warm nearby creatures in the nest, staving off the harsh cold outside and allowing ants to remain active for longer.

It’s shaping up to be a really fantastic extra level, and combined with the winter-themed music it should feel suitably seasonal. The ultimate goal is to allow your colony to settle down for the winter, safe with its warm vegetation chambers gently giving off heat, and enter a state of torpor until the spring sun warms the colony again. It’s set to be released just in time for all your holiday ant action.

The last of the amphibians that will be in the 4th tier update is the eastern newt (Notophthalmus viridescens) – more specifically the juvenile version of it, known as the red eft. They are bright orange or red, and have toxic skin – any assailant wishing harm upon the newt will have to cope with the potent tetrodotoxin. In-game, this is likely to manifest as them reflecting back some of the damage they receive back at their attacker as venom-type damage.

They love damp, swampy conditions – and your fire ants have made their home nearby. They will be unimpeded by water, and will be able to swim across the surface to reach islands much more easily than the invertebrates.

Our small but skilled art team has been working away on the swamp environment for several months now, and we’re now at a point where we can show off some of the surface! Whilst underground is a teal-tinted world full of roots, slime moulds and other such growths, the surface is green with algae, mosses, leaves and carnivorous plants.

This damp environment will have changing water levels and a variety of new resource types, such as seed-rich pinecones and nectar-like secretions from the carnivorous plants. A huge variety of creatures live here, making their homes in the unique ecological niches allowed. This includes creatures adapted to hide amongst the traps of the meat-eating flora, such as the green lynx spider.

We’re well into the decoration phase now, with our dedicated environment artist Dan flexing his painting muscles to give the two campaign levels of the fire ant tier their distinctive final look. The rest of the team have been waiting as patiently as the rest of you have to see the results, and we think they’re stunning.

When one thinks about carnivorous plants, the Venus flytrap is what immediately springs to mind. Although there are many kinds of plant adaptations that can extract nutrition from animals, such as pitchers and sticky traps, the iconic, dramatically-spiked leaf traps of the Venus flytrap are the most famous.

The trap heads themselves are adorned with tiny, barely-visible trigger hairs. If more than one of these hairs is touched in a short enough space of time, the hairs will trigger a relay of chemical and mechanical actions that close the trap, and the struggling of the doomed invertebrate only makes the trap hold on tighter. Eventually, the trap will seal, forming a kind of “stomach” in which to dissolve the prey. Inevitably the victim is broken down into a liquid by digestive enzymes which is then absorbed by the plant.

Despite their name, flying insects make up a very small proportion of the plant’s diet – roughly a third of its prey items are ants. Plants that consume animals do so as an evolutionary adaptation to poor soil quality in their area, lacking in phosphorus and nitrogen.

The in-game mechanics of the flytrap will involve them exuding a kind of sugary nectar-like food on the traps, which will likely look similar to the honeydew globules that aphids provide. There will be a percentage chance to trigger the traps, killing any ants currently on them. There will be a balancing act to collecting enough of the nectar to make it worthwhile whilst being able to respawn lost ants sustainably.

Related to the environment work detailed above, Dan C was kind enough to provide me with a breakdown of a rocky material used in the fourth tier campaign levels. It shows the amount of detailed layers needed to make surfaces realistically react to light, from the base layer, to displacement mapping (adds runtime detail to geometry), to normal mapping, which is a computationally efficient way to add extra non-geometric detail.

We announced the red velvet ant (Dasymutilla occidentalis) a while back, but we thought it’d be nice to show some of its movement and in-game mechanics. This creature is in fact not an ant at all, but a kind of wingless wasp. The females crawl on the ground and amongst vegetation, their bright red striping a warning about their excruciating stinging capabilities. They are not colloquially called the “cow killer” for no reason!

At high health, she will use her jaws to bite assailants. Eventually, as she feels more threatened, she will enter a state of panic when her health is reduced below a threshold amount. Her movement will become much faster, and she will switch to using her sting – one of the most potent insect stings in existence. The sting will allow her to cut down fire ants much faster as she fights for her life.

She also has an extremely tough exoskeleton, allowing her to take a lot of damage whilst in this frenzied state. You’ll have to weigh up the cost of replacing the ants you will inevitably lose before engaging in a tussle with this notorious resident of the green swamp.

Back in early October developer Liam, product marketing manager Dan and community manager Mike travelled down to London to go to our first live event in over two years – EGX 2021 at the ExCeL centre. Our main aim was to get back into the swing of things with live events, and of course to show off the game to new and old players alike!

It was fantastic to be able to see people playing the game in person after so long (whilst frantically taking mental notes on what needs to be improved, I think we should warn people off freeplay somehow until they’ve played the campaign!) and it was wonderful to see people discovering it for the first time. We’re hoping to do more live events again going forward if the world allows it.

I’m sure you are all familiar now with Ecosystem, a game by Tom Johnson and one of our publishing titles. It’s been in early access on Steam since March of this year, and now is the time to bring it to another store front in the form of the Epic Games Store! If you’ve been waiting for an alternative to Steam to buy the early access version of this amazing evolution sim, then 7th December is when you’ll be able to. Epic often do £10 vouchers at certain times of the year which can be applied to any product – we would be remiss of our duties if we didn’t suggest Ecosystem to spend your voucher on, obviously!

Every time I write a newsletter I look forward to this part. If you’d like to submit an Empires of the Undergrowth screenshot for consideration in a future newsletter (or the occasional community Screenshot Saturday on Twitter and Facebook) then by far the easiest way to do so is to join our Discord and post in the screenshot channel. To get some nice angles, remember to use photo mode – F9 by default. If you hold down shift whilst hitting F9, your camera will be unbound to the surface for added creativity.

With our bimonthly newsletter cycle, that concludes the newsletters for 2021.

It’s been a challenging year for all of us, for very obvious reasons, and I said the exact same thing last year. In spite of that, we sincerely hope you’ve had reasons to be thankful and celebrate too. Our friends in the US have just had thanksgiving, and this seems like a good moment to try and remember what we’re thankful for. We here at Slug Disco are eternally grateful and thankful for the patience, support and kindness you’ve shown to us, as we continue to shape our vision for EotU and Slug Disco as a whole. We know things take time – but they’re worth the wait, and the wait is no longer so long. Look out for more news before the year’s end, and we’ll see you in 2022 to continue our journey into the Undergrowth.