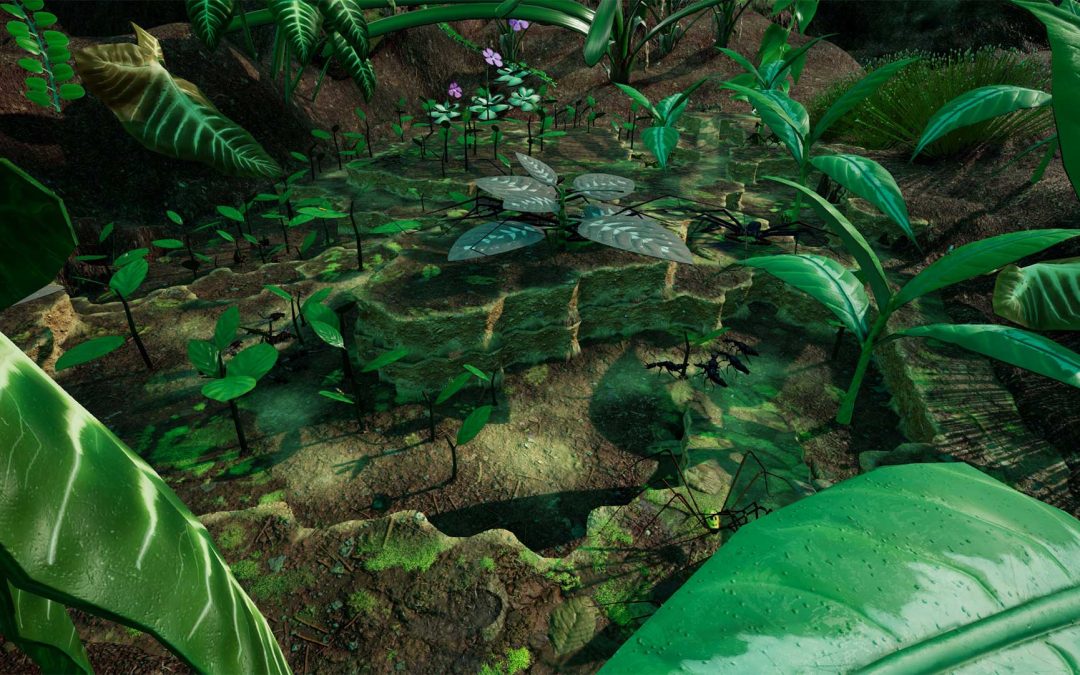 In our first newsletter of the new year, covering news from December 2020 and January 2021, we have some critters from the fourth tier of the formicarium story to talk about (and perhaps a tiny little sneak preview of a story mission), as well as some discussion of some new extra levels that will be coming your way over the next few months. Also, on the company side of things (which we do have to occasionally think about) we’ve recently launched an updated version of our website, which should make it easier to find information about Slug Disco Studios Ltd. and the games we publish. Thanks to Dan, our recently-hired marketing content creator, for his stellar work on bringing the website into the 2020s!

With our artist Matt on a big drive to complete lots of 3D models, textures and animations for the fire ant update, we have a few new creatures to show off to you. It’s exciting to be able to see some of the denizens of the swamp ready and in the game! The 4th tier levels take place in a nature preserve known as the Green Swamp in North Carolina, so all of the creatures in the 4th tier levels are either native or invasive to that place in real life.

Since we’re talking about the 4th tier levels, it’s worth reiterating our policy on release dates. We do not do estimates for big content releases – we’ve done that in the past and since game development is very unpredictable in how long certain tasks will take, we’ve ended up disappointing people before and end up having to push estimates back further. To that end, we stick to the old development adage of “when it’s done” – and as soon as we have a date we are 100% sure we can hit, we will be very loud about letting everyone know.

We announced this critter some time back, but now we have completed artwork to show you. The six-spotted tiger beetle (Cicindela sexguttata) is a common sight in the undergrowth of North America. A fast daytime hunter, its large compound eyes scour the landscape as it also feels for vibrations. It is a voracious hunter of ants, and your Solenopsis invicta are very much on the menu.

Cicindela sexguttata will be a little smaller than the other tiger beetle in the game (the beach tiger beetle), but just as deadly. We particularly like the motion that Matt has bestowed him with, just look at that elytra (wing casing) action in this animation showreel!

The great blue skimmer (Libellula vibrans) is a large dragonfly native to eastern parts of the United States. It is the first creature that is officially in a new class known in-game as “titans”. These are invariably large enemies that have special behaviours beyond that of the regular fauna you encounter on your adventures in the undergrowth.

In the case of the skimmer, it is of course capable of flight and will periodically land, and that is when you can attack it. Titans are always tough to take down and typically represent a large amount of resources if they can be beaten. Its animations are fun – we particularly like its overly-dramatic death after attempting take-off!

The little black ant (Monomorium minimum) is a tiny North American ant species that your fire ants will come up against. Although small (very likely the smallest ants that will ever be in the game), they are fierce and territorial – they wave their gaster (hind section) in a technique called “flagging”, which releases secretions from their poison glands.

This intimidating chemical and visual threat display / territory marking is effective enough to see off most competition. The exact details of the gaster flagging are yet to be tested, but it’s likely to be an area-of-effect ability that will help them make up for their small stature.

The layouts for the fire ant missions (and even missions beyond that) are completed at this point. With no further context, we thought it’d be fun to show you a little in-editor preview of what one of them looks like from above. Remember that the fire ant levels take place in swampy conditions so expect plenty of water to be present in its final form! It looks fairly bland right now as we haven’t decorated it with the swamp flora just yet – we’re not quite ready to show that off, but you can imagine how it’ll be with plants such as the Venus flytrap populating its shores.

Like many ant species, fire ants are resourceful and one of their many sources of food is honeydew that they milk from aphids. Some new aphids will be added to the game – these ones will live amongst foliage instead of roots. A modification of the “cart” system used to let leafcutters climb plants will let other kinds of ant climb plants to harvest from aphids, and indeed move them.

A new system will be in place that allows the ants to relocate said aphids to suitable plants nearer the nest. This will be a type of command the player gives rather than the ants doing it themselves. Bringing aphids closer to the nest has the obvious advantage of reducing travel time to tend to the flock.

We’ve spoken before about the ability to climb creatures coming along with the fire ant update. As part of their attack behaviours, ants will be able to climb onto certain large enemy creatures that have been rigged up for mounting. This once again involves using an extended version of the plant cart system, but this time attached to a mobile creature.

Not only can the target move, but it’s also likely trying to eat the ants that are trying to climb onto it. All sorts of problems came up, as you can imagine, from spinning creatures trying to attack ants that had mounted them, to ants jumping off creatures’ limbs that overhang the edge of the map and culling themselves in the process. A lot of these issues have to be considered to make the effect seamless and sensible!

The climbing system will be extended to previous levels eventually, but probably not with the initial release of the fire ants as allowing creatures to be climbed will change the balance of levels. This will particularly affect the levels that have the most large creatures such as 3.1 and 3.2. We’re likely to include the community in an update post-fire ants to rebalance levels around this new mechanic.

We have a number of extra levels awaiting release. We occasionally hear from people worried that these extras are taking development time away from the main campaign – there’s no need to be concerned there. They do not take anywhere near the amount of time that the campaign missions do because they all use existing assets and systems. A simple extra level can go from concept to the balancing phase in just a few short hours. John, who is the predominant creator of extra levels thus far, finds them a convenient thing to stream that doesn’t spoil upcoming campaign levels, too.

Quite simply, they are a nice productive thing for one of the devs to do if they’re waiting on work from the other two – they create some new content for everyone to be getting on with whilst we work on the big updates. They also allow experimentation outside of the comparatively rigid / realistic settings of the campaign levels (Tug of War is a perfect example of this). Below is a description of the four that are being tested and tweaked right now:

At the time of publishing (29th January 2021), these four levels have recently begun undergoing optional community testing on Steam. If you’d like to help out, please follow this link and see the instructions there. Once the testing period is complete, they will be properly released a month apart, as with previous extra levels. We’re thinking of running a little speed running competition for Enemy of my Enemy in particular!

Quite a lot of time has been spent dealing with old issues, and new ones have cropped up in the meantime. Starting in early January, an issue started to be reported amongst a small subset of players of the game suddenly stopping working altogether, which puzzled us as the game hadn’t been updated since before Christmas. It’s almost certain that an operating system, driver or proprietary software update is to blame, but getting to the bottom of it has been very tricky. We’ve found some commonality in that everyone who has this issue is using laptops with Intel processors, but frustratingly only a small percentage of that demographic is having any problems at all.

Due to the kindness of the community (particular thanks to Scyobi_Empire who has uncomplainingly helped us test various things) we’ve found a workaround that involves upgrading the engine version. This is something we intended to do in the not-too-distant future anyway, but it’s likely that our priorities have changed because of this issue so that will be happening sooner rather than later. Upgrading the engine will inevitably lead to crashes and plenty of things game-wide that need fixing, so we may be asking for some help testing that in the near future.

In other fixing stuff news, there have been some recently-reported resource gathering issues in the currently running beta. Liam spent time trying to get to the bottom of this by making a special scenario where he could quickly test ants trying to reach resources at the bottom of a cliff. The below video is representative of his entire afternoon.

Once again, the best part of writing a newsletter has arrived where I trawl through recent screenshots to find the real gems that show off the beauty, chaos, or both of Empires of the Undergrowth. If you’d like to contribute a shot to Screenshot Central, either upload your shot to the Steam Community or to the screenshots channel in Discord. By default, press F9 to enter photo mode, and hold down shift whilst you do it to get an unlocked camera and some really neat angles.

2020 was a uniquely challenging year for many of us, and 2021 hasn’t shown many signs of being much different thus far – but it’s going to be a big year for Empires of the Undergrowth, and indeed Slug Disco as a company.

Thank you for being with us throughout, and your gentle patience is as appreciated as your boundless enthusiasm! You’re a uniquely lovely bunch and as community manager I love that a good proportion of my job is interacting with the fantastic group of people that has built up around EotU and our other games. If you’re not already more closely involved and would like to be, we’d be absolutely delighted to have you in our Discord (where we’ve recently begun doing pre-releases of the optional betas) and our official forums. We hope to see you there.