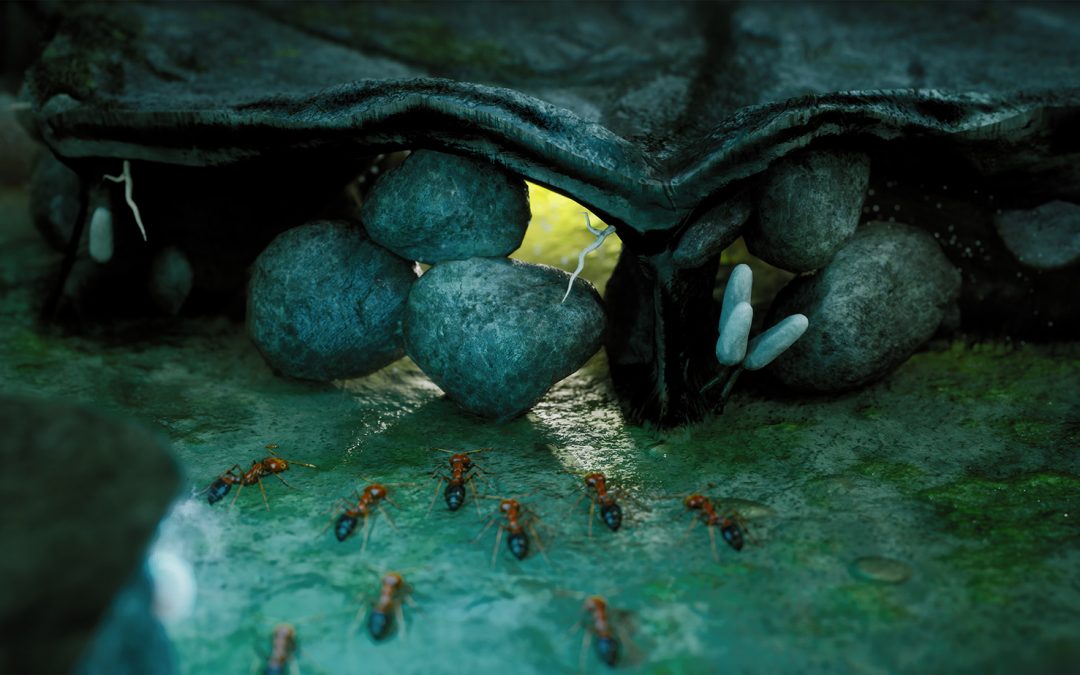 At this stage in the development cycle for the rest of Empires of the Undergrowth, we’re very close to having all of the creatures for the 4th tier complete (as well as a sizable chunk of the 5th tier ones). Our environment artist is working hard on perfecting the aesthetic of the Green Swamp, as the art team populates it with appropriate (and sometimes dangerous) flora.

We’re ready to show off some of the underground look that the fire ants and their enemies will inhabit, as well as focusing on something that has, until now, evaded the Undergrowth entirely – vertebrates! The fire ant levels will feature a number of backbone owners, and we’ve been dying to show them off to you. We’ll also talk about the events we’ve been part of recently.

We showed off some early work on the underground look for the 4th tier last time, but we’ve now completed it, so let’s revisit!

The fire ant levels are set in the Green Swamp, a nature preserve in North Carolina. Fire ants are not native to this area, but considering their invasiveness this is not an issue. We chose the green swamp specifically for its lush plant life, specifically the Venus fly trap (which we’re not quite ready to show just yet) and the wide variety of game-appropriate species inhabiting it.

A few months back we hired Dan C, who has taken to the role of environment artist with great enthusiasm. His vision for the Green Swamp was of an eerie, teal-lit underground, reminiscent of a glow worm cave.

Inspired by various slime moulds that grow in damp conditions, he’s created this wonderful aesthetic which is quite different to anything that’s come before it, and adds some nice contrast to the bold redness of the fire ants themselves.

Next time around we’re likely to have plenty to show for the surface too! We tend to show things off on Saturdays as part of Twitter’s Screenshot Saturday weekly hashtag, so remember to follow us on our socials to see stuff as soon as we post it.

The amphibians (the class Amphibia) are one of the five major classes of vertebrates. They’re widespread around the globe, and modern amphibians all exist in three orders – the frogs (Anura, 90% of amphibians), the salamanders (Urodela) and the caecilians (Apoda). We’re representing frogs and salamanders in Empires of the Undergrowth.

Coming into making this game, we were all beginners at nearly all aspects of game development. As we’ve continued the project all of us on the team have improved in the areas we’ve worked at. When we started all this, the idea of including the more complex considerations that go along with vertebrates (musculature, skin, more complex movements, etc) didn’t seem like something we wanted to touch on but that’s all changed. Let’s talk about some of the 4th tier’s amphibians.

The pine woods tree frog (Hyla femoralis) is a small frog that favours dark, damp conditions – making them ideal swamp dwellers. Despite their name, they are often found on the ground as well as in trees! They inflate their throats to make a distinctive, fast croaking sound (sound effects are a work in progress), especially at dusk. They’re fond of an insect supper, and ants are certainly on the menu.

The narrow-mouthed toad (Gastrophryne carolinensis) is native to much of the United States. Its diet consists primarily of ants – a trait that will make it one of your bitter enemies when the fire ant update comes for Empires of the Undergrowth, despite its cuteness! It is not technically a toad, but is colloquially called one because it is mostly terrestrial.

The dwarf salamander (Eurycea quadridigitata) represents the Urodela order, one of the three modern orders that make up the amphibians. It prefers swampy conditions and spends much of its time burrowed in the leaf litter. Its serpentine movements will be based on older code that was never finished for the cut velvet worm from the 3rd tier. This system allows it to bend its flexible spine as it travels, trailing its long body after it. There’s still some tweaks and adjustments to be made to the animation systems of this creature, but it’s far enough along to show you the main points.

So on to the biggest of them all! The American bullfrog (Lithobates catesbeianus) is widely spread around the world due to human introduction, but their native range is the eastern United States. Large, noisy and usually very hungry, bullfrogs are not fussy in their diet. In fact, generally speaking, the diet of the bullfrog consists of whatever will fit inside the bullfrog.

Like the other frogs, the bullfrog is able to use its long tongue to grab and eat enemies at a considerable distance. As a titan, it can be climbed upon by swarming ants, dealing extra damage to vulnerable spots on its body. We won’t post any videos of this titan-class creature until closer to release. It’s on course to be the largest actual creature that will be in the game, if you don’t count the scientist (we don’t).

With much of the world getting closer to some semblence of normalcy, events are starting to happen and we’ve been fortunate enough to join a number of these remotely over the past couple of months. Our first in-person event in nearly 2 years will be EGX 2021 in London, starting on Thursday 7th October (next month at time of writing)!

Three of us from the Slug Disco team (developer Liam, marketing content creator Dan and community manager Mike) will be joining our friend Paul Herve where we’ll have two booths at EGX, one showing Empires of the Undergrowth (a great opportunity to talk to us about the fire ant update!) and the other showing Paul’s awesome upcoming creature evolution game Adapt (more on this collaboration coming in the future). We’ll be in the EGX Rezzed Zone for all 4 days of the event (Thursday 7th October – Sunday 10th); come and find us if you’re in the area. We’re quite friendly.

The most outright fun event we were virtually part of this year was the Indie Arena Booth as part of GamesCom 2021. The Summercamp of Doom event was presented in a top-down RPG format where you gained XP by interacting with NPCs, and unlocked badges by talking to the denizens of virtual booths. It was a ton of fun and certainly a unique way to present things! The demo we developed for this event included a fire ant demo level “The Promised Land”, which has disappeared for now but thanks to everyone who played it whilst it was there. Fire ants will be back with tier 4!

The Big Indie Pitch runs regular competitions for indie developers in a variety of categories. We entered a while back, and to our astonishment won first place in their Digital Big Indie Pitch (PC+Console Edition) #9! Liam was interviewed afterwards, so if you’d like to hear a little of his perspective on how the games industry has treated us read through that article. Liam stresses that a combination of sheer optimism, belief in our product and a generous smattering of luck got us to where we are now. I feel he leaves out a lot of hard work over a long time! Thanks so very much to Steel Media Ltd. for running this fantastic event. We’ll be making good use of that promotion package!

Lastly but by no means leastly, we had a physical booth at this year’s BitSummit, which is Japan’s longest-running indie games festival. We couldn’t be there in person due to the pandemic, but it was fantastic to know our game was being exhibited on the other side of the world! Japanese is one of the additional languages we intend to translate the game into for full release.

Something a little different for Screenshot Central this time – the three shots I’ve chosen all come from one player. Frazzz is a YouTuber and long-time coverer of Empires of the Undergrowth, and he recently played the aforementioned “The Promised Land” on his channel whilst it was an event. Thanks to him for sending in these excellent fire ant snaps – he’s really got an eye for them. We look forward to lots more Empires content from him!

Usually I take these screenshots either from our Discord or from the Steam community uploads; those are the easiest way for me to see them if you’d like to have your screenshot selected for a future newsletter.